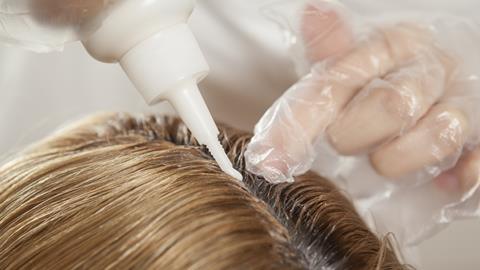 Dye hard with a valence

The science of covering up your 50 shades of grey

As we age, our locks grow grey and many people choose to colour their hair in an effort to hold onto the appearance of youth.

There is no natural way to recover lost hair colour, so many people with silver locks rely on artificial hair dyes. In Europe and the US, roughly three-quarters of women use a hair colourant – although this is not exclusively because of grey hair. In 2016, almost 1.43 billion units of such colour products were sold in the US alone. The global hair colour market was valued $18.6 billion (£14.2 billion) in 2016, and it is projected to grow at a compound annual rate of 8.6% until 2024.

But the science of hair colourants for grey hair isn’t as straightforward as it seems.

Why does hair turn grey?

Humans are born with about 100,000 scalp hair follicles, each containing pigment cells that make melanin – the biological compound that gives hair its colour. Hydrogen peroxide normally found in hair follicles builds up as we age, and that blocks melanin production and turns hair grey. Because genes help determine when these biochemical processes are likely to occur, there is a significant genetic component to why and when a person starts going grey. Nevertheless, the general rule of thumb is that 50% of the population will have 50% grey hair when they reach 50 years old.

Scientists have yet to identify a specific gene for premature grey hair, according to Michelle Galant, a clinical dermatologist at Stanford University. ‘There are some premature greying, premature ageing, syndromes, but those are extremely rare,’ she explains. ‘For the typical person, I am not aware of the genetics being known.’

What about external causes?

Environmental factors such as cigarette smoking can also influence the greying process. For example, researchers at the University of Jordan in Amman concluded in 2013 that smokers were 2.5 times more likely have premature onset of grey hair (defined as before age 30). Previous analysis by UK researchers found that smokers four times more prone to turn grey early than non-smokers. Scientists have suggested that smoking might generate a lot of reactive oxygen species, which can accumulate and lead to significant oxidative stress, possibly impairing the melanin-producing cells known as melanocytes.

Can stress cause hair to turn grey?

While stress is commonly blamed for grey hair, it is more likely to cause hair loss. There is some evidence that trauma can lead to early depigmentation of hair in people predisposed to grey hair, but this phenomenon is not well understood.

Can permanent dyes be used on grey hair?

Yes, but grey hair tends to be more coarse and wiry than pigmented hair, which poses an obstacle for hair dyes. It is less capable of retaining hair colour and more susceptible to environmental influences that cause weathering of the hair shaft.

Traditional permanent hair dyes are also damaging. In the middle of the hair shaft is the cortex, into which pigment must be directly applied in order to permanently change the hair’s colour. This means getting past the cuticle – the dead cells that line and protect the hair shaft, which are responsible for the hair’s shine and manageability. Typically, hair dyes do this by having a sufficiently high pH to open up the cuticle, but this has the side effect of removing the lipid layer that keeps the hair hydrated and healthy. ‘Once that process is finished, the cuticle doesn’t fully go back to the way it was before,’ Galant explains. ‘The lipid layer is gone and the cuticle re-forms to some extent, but not in the same, perfect “shingles on a roof” type of pattern.’

What are the alternatives?

Lots of research has examined whether hair dyes raise the risk of certain cancers through skin absorption or inhalation of fumes. These studies have found some hair dye ingredients, including certain aromatic amines, cause cancer in lab animals, particularly after receiving large amounts of these products for long time periods.

Human studies have identified a ‘small but fairly consistent’ increased risk of bladder cancer for hair salon employees, but not for their customers, according to the American Cancer Society (ACS). The evidence for hair dyes increasing the risk for other types of cancer in humans is considered mixed or inadequate.

Meanwhile, the World Health Organization’s International Agency for Research on Cancer has concluded that workplace exposure to hair dyes as a hairdresser or barber is ‘probably carcinogenic to humans,’ based on the bladder cancer data. However, the agency considers personal hair dye use to be ‘not classifiable as to its carcinogenicity to humans,’ due to lack of evidence.

Although the US government’s National Toxicology Program does not classify the human carcinogenic potential of hair dyes, it has concluded that some chemicals that are or were used in hair dyes, like trichloroethylene and styrene, are ‘reasonably anticipated to be human carcinogens.’