Earliest use of chilli sauce put back hundreds of years 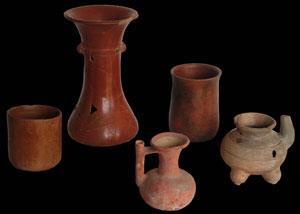 Chemical analysis of 2000 year old pottery artefacts unearthed in southern Mexico suggests that the people living there were spicing up their diet with chilli sauce and drinking chilli flavoured beverages, possibly as part of rituals, almost a thousand years earlier than previously thought.

Relatively few ancient specimens of Capsicum have been uncovered and the earliest known evidence of domesticated chillis – from macrofossils – dates back to around 6000 years ago in Ecuador and Mexico. However, to date, no chemical analysis has been performed on artefacts either – whether pottery vessels or stone tools – to determine if chilli peppers were used by ancient cultures living in these regions.

Now, Terry Powis at Kennesaw State University, US, and colleagues have chemically analysed the residue in 13 pottery vessels, including spouted jars, pots and vases. The potteries are 1700–2400 years old and were discovered at an archaeological site in the state of Chiapas, which was at that time inhabited by the Mixe–Zoquean people.

'The best and most direct evidence for chilli pepper use in Mesoamerica prior to our study is from Ceren,' says Powis. 'So our work pushes back this date from circa AD540 to circa 400BC. To be honest, our study is the only one of its kind to show direct evidence of chilli pepper use. In all of the other examples listed in the paper there is only indirect evidence – of chillis and pots found together. We actually linked the two together for the first time, and that is an important development. Therefore, we actually have the earliest known consumption of the peppers.'

The types of pottery that were analysed are usually associated with the consumption of cacao beverages by Mesoamerican peoples. The team was originally looking for traces of cacao, as well as chilli, which is thought to have been used to make cacao-based drinks more palatable. However, while no traces of cacao were discovered, they confirmed the presence of Capsicum species in five of the vessels. 'During the mass spec analysis we were completely surprised by the fact that no cacao was present in any of the pots tested,' says Powis. 'In fact chilli was present.' Powis adds that they haven't been able to identify which species of chilli pepper was used but hope to be able to do this in the future.

Based on this new evidence it seems that ancient Mesoamerican peoples were using chilli peppers far earlier in their history than was thought. Given the absence of cacao and the fact that artefacts were found in places associated with high status individuals and rituals, the team speculates that chilli peppers were possibly used to produce a spicy beverage or alternatively a chilli sauce that was stored in the spouted jars and subsequently poured as a dining condiment, possibly during ritual feasts.

'Chilli is one of Mesoamerica's greatest culinary gifts to the world, yet its history at home is incompletely known. This study of the chemical signatures of chilli on ancient pottery adds to our understanding of the chilli in the past,' says Paul Minnis, an archaeologist at the University of Oklahoma, US. 'The techniques used here can be extended to other places and times to expand even further our knowledge of this much loved, and sometimes and loathed, food.'