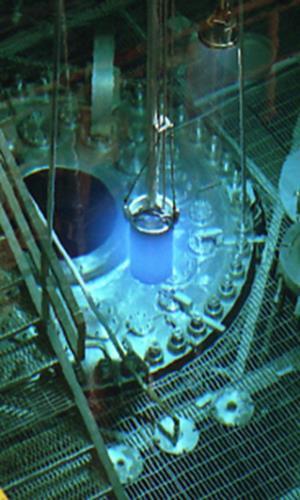 Element 117 or ununseptium has taken a step closer towards being given a place on the periodic table after an international team of researchers confirmed its production and made a more detailed analysis of its decay profile1than when the element was first reported.2 It joins the slowly but steadily expanding list of so-called superheavy elements (SHEs), which do not occur in nature but can only be made in specially designed reactors. The element was created at the GSI accelerator laboratory in Germany where an upgraded detector demonstrated its ability to pinpoint isotopes with long half-lives, a key challenge in the search for long-lived SHEs that occupy an ‘island of stability’ – something that has been postulated but not seen so far.

The research effort involved more than 70 scientists and engineers from 11 countries. A target of purified berkelium-249, produced at the Oak Ridge National Laboratory in the US, was bombarded with a high energy beam of a neutron-rich isotope of calcium at the GSI lab, resulting in the occasional fusion of the two nuclei. ‘You produce literally only a few atoms over several weeks and these have a half-life of about 50 milliseconds,’ says team leader Christoph Düllmann of Johannes Gutenburg University of Mainz in Germany.

An upgraded detector array in the facility tracked the decay chain of element 117 as it emitted a particles, confirming the production of the element and, significantly, observing that the a decay chain was longer than had previously been recognised when 117 was first produced in 2010 by a joint Russian–US team.

Then, it was thought that once 117 had decayed to 105, the latter underwent spontaneous fission. In the new experiment, dubnium-270 (element 105) was seen to decay to lawrencium-266 (element 103). The detection of this extension of the decay chain is significant because dubnium-270 has a relatively long half-life of around one hour. Confirming the a decay of such a long-lived isotope is difficult because peripheral activity occurring within the reactor simultaneously makes it tricky to ascribe the decay to a specific isotope. The ability of the detector to pinpoint the source of this decay bodes well for the hunt for more long-lived superheavy elements.

Walter Greiner, an expert in SHEs at the Frankfurt Institute for Advanced Studies in Germany, says: ‘This is a step forward. But the most important task is to create superheavy elements with more neutrons. They are expected to live much, much longer. Various ideas on how to achieve this have been put forward by theoreticians. The game will go on!’

It is now up to the International Unions of Pure and Applied Physics and Chemistry to decide whether there is enough evidence to confirm that 117 is a new element, and thereafter for its discoverers to propose a name. A joint working party of the two unions is currently considering the matter.