We speak to Tom Brown, the 2014 Chemistry World Entrepreneur of the Year, and find out why cells spend so much time doing nothing 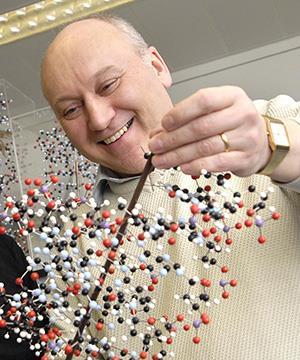 0.40 – The first organism that can grow and replicate with an unnatural base pair in its DNA – giving the cell six nucleotides instead of the usual four – has been created by scientists in the US. Bacterium survives unnatural DNA transplant

4.11 – Element 117 or ununseptium has taken a step closer towards being given a place on the periodic table after an international team of researchers confirmed its production and made a more detailed analysis of its decay profile than when the element was first reported. Element 117 poised to enter superheavyweight division

5.26 – With three blossoming start-ups under his belt, Tom Brown is our Entrepreneur of the Year. He tells Sarah Houlton the secrets of his success. Triple-stranded success story

11.57 – We discuss Pfizer’s recent failed bid to buy AstraZeneca (AZ), weighing up the pros and cons. Since recording the podcast, Pfizer withdrew their bid mere hours before the deadline, but will be able to try again in 6 months time. Pfizer presses hard for AstraZeneca deal

19.08 – Living cells spend a lot of time apparently doing nothing. How cells enter and exit these inactive states, and just how inactive they really are, are challenging questions with answers that involve a lot of clever chemistry. The chemistry of inaction

27.21 – A new self-healing polymer that can repair holes far larger than any material before – more than 3cm wide – has been unveiled by US researchers. Polymer sets new self-healing record

30.11 – The dream of producing hydrocarbon fuels from carbon dioxide and sunlight is one step closer thanks to chemists in Europe who have made jet fuel from scratch in a solar reactor for the first time. ‘Solar’ jet fuel made out of thin air