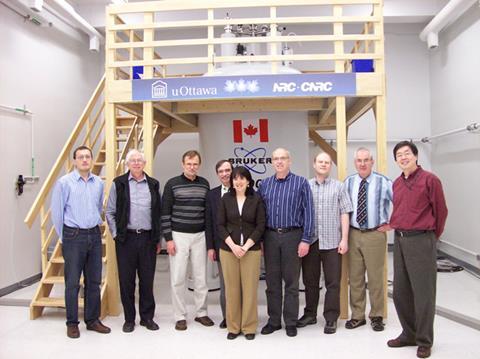 Canadian scientists are celebrating a small victory in an otherwise bleak landscape for research funding, as a world-class nuclear magnetic resonance (NMR) facility in Ottawa received a last minute reprieve from closure.

Managed by the University of Ottawa on behalf of a consortium of Canadian universities, the Canadian National Ultrahigh-Field NMR Facility for Solids is funded through the Canadian Foundation for Innovation (CFI), along with provincial funding agencies, Bruker Canada and the National Research Council Canada (NRC).

The NMR facility faced a funding crisis, as cash from the Natural Sciences and Engineering Research Council of Canada, Canada’s federal funding agency for university-based research, dried up. Meanwhile, the NRC withdrew support after a 10 year collaborative agreement ended and began charging rent to house the equipment.

The facility steering committee announced on 21 November that the multi-million dollar NMR facility, opened in 2005, must close within a matter of weeks when its money ran out. One of the facility users, Glenn Facey, said in an open letter to the federal government: ‘With only user fees and university support, the facility no longer has the financial resources to continue operation. Closing it will result in the further loss of more Canadian scientists to other countries, as well as forfeiting the investment from Canadian taxpayers.’

Facey went on to describe how work at the NMR facility had contributed to hundreds of significant publications in the fields of materials science, chemistry and bioscience. ‘It has boosted the careers of dozens of scientists and has contributed to the education of scores of students. The very well-managed, highly successful facility has been an excellent investment of Canadian tax dollars,’ he added.

Facey’s letter and the public outcry which ensued apparently had an effect, since the NRC and the University of Ottawa have now agreed to work together to find a solution. However, as yet the details have not been made public. Dan Wayner, the NRC vice president of emerging technologies and Mona Nemer, the university’s vice president of research, released a joint statement that said: ‘NRC and the university continue to be important strategic partners. We remain committed to working together to advance science, technology and innovation for Canadians.’

According to Victor Terskikh, manager of the reprieved NMR facility, ‘there was a positive development and we are optimistic. However, the story with struggling Canadian science is much, much bigger than the closure of our NMR facility, however dear it is to us.’

The facility’s 900 MHz NMR spectrometer is unique in its dedication to solid-state NMR research in materials science, where the high magnetic fields are beneficial for quadrupolar and low-gamma nuclei such as oxygen-17, magnesium-25, and chlorine-35 among others. It is the only one of its kind in Canada, and is one of the top research instruments of this calibre, drawing users from all over Canada and the world.

The funding cuts come against a backdrop of increasing frustration for Canada’s scientists. Other major, long-term projects such as the Experimental Lakes Area and the Polar Environmental Atmospheric Research Laboratory are among hundreds of programmes and world-renowned Canadian research facilities that have been closed or have had funding slashed by the federal government. In addition to broad funding cuts, scientists have also complained that strict communication protocols have placed unreasonable restrictions on their right to discuss their publicly funded research with the media.