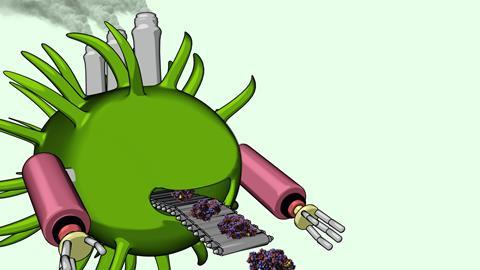 Engineered bacteria have been injected under the skin of rodents where they functioned as living drug or vaccine factories. The approach, which used modified Escherichia coli trapped inside hydrogel microcapsules, holds promise for new therapies to treat diseases such as diabetes and cancer.

Microbes have been modified for decades to produce protein drugs, including insulin. However, because proteins are easily degraded and inactivated, it has been difficult to develop protein drug delivery methods that allow for their sustained release beneath the skin without repeated and regular injections.

Now Hanjie Wang and his colleagues at Tianjin University in China have developed a living therapeutic approach by filling hydrogel capsules with engineered E. coli to produce and release protein drugs as ‘in vivo drug factories’. The team demonstrated the concept’s potential with two engineered E. coli strains: one that produced a protein that promotes insulin secretion to reduce blood sugar levels, and another that manufactured a protein ‘nanovaccine’ against cancer.

Safely trapping engineered bacteria within insoluble capsules that could still allow the therapeutic proteins to escape was crucial to this approach. To do this, the researchers turned to chitosan, a biocompatible polysaccharide derived from the exoskeleton of shellfish such as shrimp and lobster, which is often used in drug manufacturing. The team added engineered E. coli to a chitosan solution, which was then treated with sodium tripolyphosphate, resulting in hydrogel capsules containing the bacteria.

However, although the engineered bacteria could produce therapeutic proteins, the researchers needed a way to get them out of the microbes. This was achieved at the engineering stage by adding a gene that would periodically breakdown the bacteria’s cell membrane allowing therapeutic compounds to leak out.

This worked by harnessing the quorum sensing abilities of E. coli, by which chemical communication signals between bacteria regulate gene expression. This means that the required gene for breaking the bacterial membranes was only triggered when the bacteria’s population reached a certain density. As a safety measure and in order to terminate the therapy, the team engineered a kill system into the bacteria that could be triggered by blue light.

In one experiment, E. coli containing capsules were injected under the skin of diabetic rats. Results showed that the therapeutic protein was released smoothy over two weeks and reduced blood glucose levels. Another experiment with the ‘nanovaccine’-producing strain revealed that immunity was activated in mice to prevent tumour growth. No inflammation or immune response was apparent upon administration.

‘The importance, impact and power of this work is derived from the authors’ ability to first develop, and then seamlessly stitch together, several design modules which act in synergy,’ comments Yuval Elani a synthetic biologist at Imperial College London, UK. ‘The concept of using bacteria as in-situ drug factories is compelling and the authors show some of the first steps needed to achieve this goal.’

‘As always with “living” therapeutics, significant regulatory and public perception challenges need to be overcome. But it is clear that the underpinning science is reaching an incredible level of sophistication, which this paper showcases,’ says Elani. ‘Deployment in real-world applications is only a matter of time.’