Toxic legacy of Agent Orange lives on in Vietnam

President Obama’s visit to Vietnam last week was certainly eventful. The US president announced plans to strengthen international ties and lift the decades-long ban on selling lethal weapons to the country. He also met with human rights activists, sampled street food in Hanoi and was serenaded by one of the country’s best-known female rap artists. 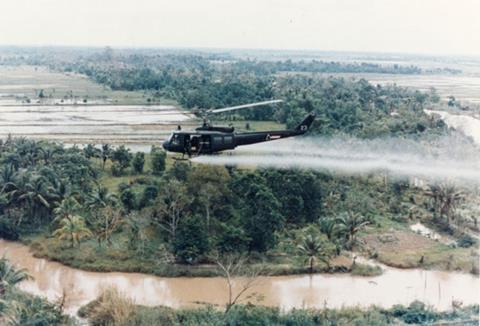 Absent from the trip, however, were any fresh commitments to help the victims of Agent Orange – a herbicide sprayed during the Vietnam War over vast areas of the country’s forests and farmland that has since been linked to death, disease and disability.

Agent Orange – named after the orange stripes on the barrels used to transport it – was used extensively by the US military to remove forest cover and destroy militia crops from 1962 to 1971 during the war. It shouldn’t have had any direct effect on the people of Vietnam as its own active ingredients – the herbicides 2,4-dichlorophenoxyacetic acid (2,4-D) and 2,4,5-trichlorophenoxyacetic acid (2,4,5-T) – only affects plants. But the mixture was contaminated with a highly toxic dioxin called 2,3,7,8-tetrachlorodibenzodioxin (TCDD), formed as an unintended by-product during the 2,4,5-T manufacturing process when temperatures were too high. By the time anyone realised this it was far too late – more than 40 million litres of contaminated Agent Orange had been dumped on about 12% of the total area of South Vietnam.

It had been hoped – and rumoured – that the president would meet with some of the victim support organisations during this week’s visit, or announce a new funding commitment. But his only mention of Agent Orange – during a speech in Hanoi on 24 May – merely stated he was proud of the current US-funded clean-up efforts, which are only tackling the worst-hit areas. For many, this highlights the US’s unwillingness to address a tragedy that has persisted for decades.

The effects of TCDD poisoning have been extensively studied in animals. In rats, it has been associated with tumours, premature death and birth defects even when consumed in extremely low quantities. Authorities in Vietnam say millions of lives have been ruined by exposure to TCDD through contaminated crops or water. Incidences of several types of cancer – including childhood leukaemia – are higher in areas where contamination is most severe, and children have been born with birth defects and severe mental and physical disabilities, often unable to communicate, feed or look after themselves. TCDD is incredibly stable in soil, which has allowed it to persist for decades after the spraying of Agent Orange stopped. The Hatfield Group – a consultancy based in Canada – has worked on environmental monitoring of TCDD in Vietnam for 20 years, and has identified dozens of ‘hotspots’ where contamination is most severe. They have also measured and noted the high concentration of TCDD in the blood of people inhabiting these regions.

But the issue of health impacts remains controversial. ‘The difficulty … is that proof of the connections is quite elusive for many reasons, including inadequate research and a political and professional environment that has not always encouraged independent, objective research,’ says Chuck Searcy, a US veteran now based in Vietnam who runs the Agent Orange Working Group charity. He adds, however, that for him and many others the available evidence is compelling that the contamination has had a significant impact on the health of people in Vietnam, and in many cases exacerbated problems caused by poverty and poor access to healthcare.

As debate around the extent of its effects has raged on over the years, the US has been reluctant to commit money and resources to deal with the aftermath of Agent Orange use. Initially it only provided a modest amount of compensation to veterans who could show that their health problems were likely to have been caused by handling the contaminated herbicide. But the tide is starting to turn. In recent years, the US government has agreed to fund efforts to clean up the contamination, and a mammoth effort to decontaminate 90,000m3 of soil from Danang Airport – one of the worst affected regions – began in 2012, organised and funded to the tune of $100 million (£68 million) by the United States Agency for International Development (USAID).

Cleaning up TCDD is easier said than done, however. Though it is very persistent in soil, the contamination only extends a couple of metres down. But the existing approach of scooping up the contaminated top layer of soil and dumping it in designated landfill sites is far from ideal – the transport process and runoff from the landfill can spread contamination. USAID’s project is attempting to implement a more permanent solution, in which the contaminated soil is heated to break down the TCDD into less harmful products such as water, carbon dioxide and chlorides.

This presents logistical challenges, but has been successful with sites elsewhere. TerraTherm, a company specialising in soil remediation who carried out a demonstration project in Japan, were chosen by USAID to build the necessary infrastructure at Danang. Their decontamination system comprises a 100m x 70m chamber to hold the contaminated soil. It took the best part of a year to build the chamber and fill it with the first 45,000m3 of soil. Once packed into the chamber, more than 1000 immersion elements heat the soil until it reaches 335°C – hot enough to decompose the TCDD. Decontaminating this volume of soil takes several months, during which time drains and pipes remove the decomposition products and take them to a nearby plant to be treated, and later released back into the environment.

The first 45,000m3 batch was completed in 2015, and the treated soil and sediment will be used to construct a new runway at the airport. The project’s second phase – originally due to be finished this year, but now projected to go on until 2018 – has begun, and a second lot of soil is currently being loaded into the system.

The sheer difficulty and expense it has taken just to partially deal with one contamination hotspot highlights just how much of an uphill struggle the country still faces. The next site to be tackled will be another former airbase at Bien Hoa, but work has not yet begun.

‘There has not been much talk regarding the remaining two dozen or so sites which have been identified, all much smaller, most of them former US bases where Agent Orange was handled, stored and loaded,’ says Searcy.

Although the technical clean-up is important, he adds, politicians should not ignore the need for health and social work interventions focused on helping those who have already fallen ill  as a result of dioxin contamination.

‘Many of us – veterans, public health professionals, ordinary citizens are concerned that not enough attention and resources have been devoted to the plight of millions of Vietnamese whose medical and health conditions, and home environments, beg for some intervention and assistance,’ Searcy says. ‘While the problem may not be deliberately neglected, a comprehensive strategy to truly help suffering families has not been forthcoming.’