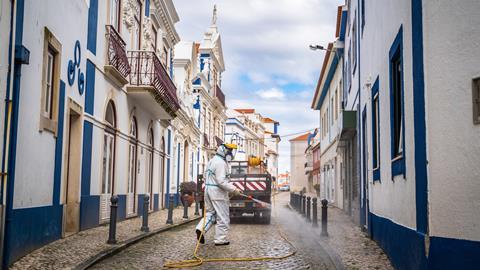 Explainer: how do disinfectants tackle Covid-19?

The spread of Covid-19 has spurred a surge in demand for disinfectants to keep our hands and surfaces clean. But what do we know about how disinfectants actually deactivate Covid-19, and how should we be using them?

Do disinfectants stop the virus?

Yes. Covid-19 is an enveloped virus, which means the protein capsid containing the viral genome is surrounded by a lipid membrane, and that offers a fairly flimsy defense against disinfectants.

Alcohol-based products will disrupt this lipid layer, and that stops the virus being able to recognise and latch on to host cells. Alcohol solutions at concentrations of 70–80% have been shown to deactivate enveloped viruses with one minute exposure time.

Quaternary ammonium compounds are another class of disinfectant that will attack the lipid structure of the viral envelope, and these are typically used as surface disinfectants. Bleach and other potent oxidisers break down the virus’s essential components.

What about just soap and water?

Sure. Soap works in a very similar way to alcohol-based sanitisers – disrupting the virus’s fatty lipid membrane and so deactivating it.

What do we need disinfectants for, then?

Using soap and water might not be practical when you’re out and about to get essential supplies or exercising. In that case, an alcohol-based hand sanitiser will come in handy.

You might also want to use a surface disinfectant to avoid the virus spreading at home. The US Centers for Disease Control recommends frequently disinfecting high-touch surfaces, such as tables, doorknobs, light switches, phones, remote controls, keyboards and desks.

But more than that, we need surface disinfectants in high-risk public areas, such as in hospitals, care homes and the food service facilities. These are more likely to use disinfectants based on quaternary ammonium compounds, chlorine or hydrogen peroxide; the European Centre for Disease Prevention and Control recommends the use of sodium hypochlorite or products based on ethanol (at least 70%).

Disinfectants can also help to address the shortages in PPE such as respirators for frontline healthcare workers. A preprint published by researchers at the US National Institutes of Health reports that using vapourised hydrogen peroxide to decontaminate respirators allows them to be reused up to three times without affecting the performance of the equipment. 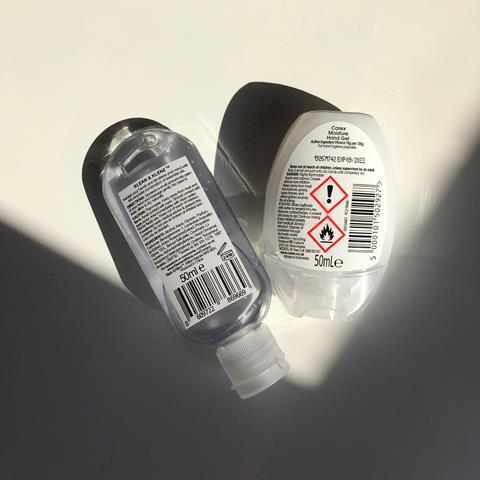 How long does the virus stick around on surfaces?

It depends on the type of surface. A US study found the virus persisting for two to three days on stainless steel and plastic surfaces. Another study carried out in a hospital found that similar coronaviruses can persist on hard surfaces like glass, metal or plastic for up to nine days.

And what about outdoors, do we need to disinfect buildings and trees too?

We’ve all seen those photos and videos of trucks spraying streets and troops of sanitation workers fogging parks and plazas.

The disinfectant most commonly used for these measures is a diluted solution of sodium hypochlorite, or household bleach. But it’s unclear whether bleach destroys coronaviruses on surfaces outside, or in the air. Bleach itself breaks down under ultraviolet light. And it’s debatable whether coronavirus exposure from outdoor surfaces is bad enough to warrant fogging; we’re not likely to go around touching the pavement or licking trees.

How do I find out what to use?

The US Environmental Protection Agency (EPA) has released a list of antimicrobial products for use against Covid-19, under an emerging viral pathogens programme developed for just this kind of scenario. The list contains several dozen products including ready-to-use sprays, concentrates and wipes. It is important to understand that very few products (if any) have likely been tested on Covid-19 so far because it is still difficult to do that kind of efficacy testing, and time is of the essence.

Also, remember that the EPA list only covers products already registered with the agency as pesticides. Products like soaps and detergents – which can deactivate the virus, too – aren’t on the official list because the agency doesn’t regulate them as pesticides.

There is no comparable list for Europe, mostly due to a very different legal system for the approval of disinfectants and the marketing claims that companies are allowed to make. Some countries, such as the Netherlands and Switzerland, are running lists of hand and surface disinfectants that are generally approved as safe and effective against pathogens. It’s worth checking lists like these to make sure you don’t fall victim to a rogue manufacturer of counterfeit hand sanitiser.

The US EPA and regulatory enforcement authorities in several European countries have seen an increase in reports of illegal disinfectants on their markets. The shortages of disinfectants and hand sanitiser in particular have created an opportunity for unscrupulous sellers.

So we’re running out of disinfectants?

The Covid-19 pandemic has boosted the demand for disinfectants and at the same disrupted the supply chains of the companies that make it. Producers have been struggling with a lack of active substances, such as ethanol, propan-1-ol and propan-2-ol, as well as co-formulants and some of the packaging they need for getting their products to market, according to European disinfectants trade body, the International Association for Soaps, Detergents and Maintenance Products.

But it’s looking pretty good for stocks being replenished. Manufacturers have been shifting production at plants around the world to making disinfectants. BASF, for instance, has reallocated several tonnes of isopropanol for the production of hand sanitiser. Dow Chemical has shifted production at five of its plants around the world to produce an estimated 200 tonnes of sanitiser a week. Even distillers and breweries are using their alcohol supply to churn out hand sanitiser. At the same time, regulators have been easing the laws they set to fast-track market access for new disinfectant products, which would normally have to undergo a lengthy authorisation procedure.

Can we use disinfectants to ‘clean’ people infected with coronavirus?

No, disinfectants are toxic to your own cells, injecting or ingesting them is likely to make you very ill and could even be fatal.