Table of nuclides expanded with discovery of 73 new nuclei 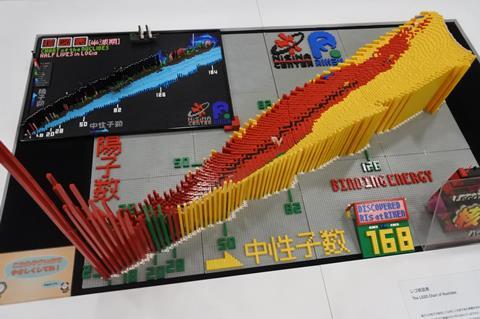 The Lego table of nuclides at Japan’s element hunting institute Riken. The x-axis is the neutron number and the y-axis the atomic number. Black means the nuclide is stable. Red that the nuclide has been discovered and is radioactive. Yellow means the nuclide is predicted and expected to be radioactive but has not been discovered. Green indicates a neutron-rich nuclide and blue a neutron-poor nuclide that was discovered by Riken. The height of each column represents the isotopes’ instability. For heavy elements, the instability represents the possibility of decaying into lighter elements, whereas for the lighter ones (lighter than iron, which is the lowest of all), it represents the possibility of fusing into heavier ones (which is why the column for hydrogen is the tallest since it can be fused into helium relatively easily)

Scientists at Japan’s Riken laboratories – famed for their discovery of nihonium, element 113 – have created 73 previously unknown nuclides of well-known elements like iron (76Fe), silver (132Ag) and iodine (147I).1-4 These exotic nuclei can help researchers to understand how heavy elements formed when the universe was in its infancy.

To date, 3000 nuclides have been filled in on the table of nuclides – the counterpart to the periodic table of the elements – but 4000 more ‘are expected to exist, according to the theoretical estimation’, says Hideto En’yo, director of Riken’s Nishina Center for Accelerator-Based Science where four research teams discovered the 73 new nuclides over the last year.

The lightest of these nuclides belongs to manganese (73Mn), the heaviest to erbium (180Er). Most of the nuclides are neutron-rich – they contain more neutrons than any previously discovered varieties of the element. Rhodium-128, for example, has six more neutrons than the previous heaviest isotope, rhodium-122, and a whopping 25 more than the only stable isotope, rhodium-103. Praseodymium takes the title of adding the most new nuclei – six in total – to its collection.

To make the new nuclides, the four research teams fired beams of uranium-238 atoms at a beryllium target. As the uranium atoms pass through the separator, they break apart, spewing out all kinds of new nuclides. Finding and detecting the new ones, however, takes time and patience. ‘The probability of production is given by the cross section [or probability of nuclear reaction], so the production is random,’ explains Toshiyuki Sumikama, whose team discovered eight nuclides.

With half-lives of only a few milliseconds, none of the exotic nuclei is going to be of any immediate practical use. However, finding out more about their properties is essential to understanding how elements heavier than iron form during enormous cosmic events like neutron star mergers, explains En’yo. There are also ‘long-lived isotopes with half-lives of years […] predicted for undiscovered isotopes at heavier nuclei’, adds Sumikama.

Riken scientists are now trying to further expand the table of nuclides. ‘A few hundreds to a thousand can be explored within the current facilities,’ says En’yo. ‘[But] there isn’t a road map yet to the discovery of [all] 7000. Probably we need new inventions to produce those isotopes.’