Researcher argues your skating speed will dictate the slipperiness of ice 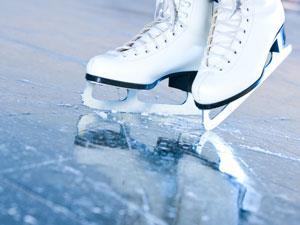 If you are tempted to slide across an icy surface this Christmas, you may fall flat on your face or glide across the slippery terrain with your dignity intact. But a scientist in Germany has now calculated why sliding across ice is so unpredictable and that your speed determines how slippery the ice will be.

A common misconception is that pressure exerted by a blade or ski forces ice to melt, allowing a skater to move at speed. The ‘pressure melting’ theory was put forward by John Joly in 1885 and inspired by Lord Kelvin’s work on freezing point depression. But by the mid-20th century, researchers found the pressures involved were too low for local melting, although this explanation is still found in many books.

Researchers have since discovered that frictional heating creates a water layer, which provides the low friction necessary to slide. This is often thought of as an abrupt transition, but Bo Persson from Jülich Research Centre believes the change is more gradual.

Using a mathematical model to analyse friction coefficients, Persson found that before a water film forms, an amorphous ice layer will grow at a certain sliding speed. The layer’s shear strength, and the friction, will continuously decrease as the speed and surface temperature increases. He argues such a heat-softening effect helps to explain why sliding can be achieved even before a continuous water layer forms.