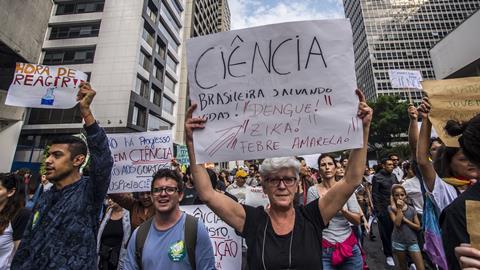 The Brazilian government has announced it is freezing around BRL30 billion (£5.9 billion) of its federal budget, which includes withholding BRL2.2 billion allotted to its Ministry of Science, Technology, Innovation and Communication. The ministry is left with a budget of BRL2.9 billion for 2019 – a 42% cut and its lowest level of funding since 2006.

The president of the Brazilian Society of Chemistry, Norberto Peporine Lopes, estimates that the cuts threaten more than 10,000 research projects in the country, as well as approximately 80,000 scholarships financed by the ministry.

This squeeze is the latest in a series of reductions to have hit the ministry since 2015. In 2017, a similar budget cut of 44% prompted scientists throughout the country to take to the streets in protest, although the government subsequently made additional funds available.

Jailson de Andrade, a chemistry professor at the Federal University of Bahia in Brazil, warns that the cuts will be catastrophic for Brazilian research. He suggests that the impact will be especially acute in the field of chemistry, since it involves updating, maintaining and operating equipment as well as highly trained personnel. Even if funding is increased in the future, it is not easy to reassemble an experimental research team after it has been dismantled, de Andrade notes.

Brazil’s National Council for Scientific and Technological Development (CNPq) – the research support agency linked to the science ministry – was already facing a deficit of BRL300 million in its BRL1 billion commitment to scholarships and research grants. CNPq’s current budget can only cover scholarships until September 2019.

Details about how these additional budget cuts will affect CNPq are not yet available, but the agency’s president, João Luiz Filgueiras de Azevedo, remains hopeful. ‘This will be not an easy year, but every effort is being made to recover the investment needed for research in the country,’ he tells Chemistry World. ‘We are cautiously optimistic that we will be able to end the year honouring the commitments already made.’

Most of Brazil’s states also have local research funding agencies. However, only the São Paulo Research Foundation (Fapesp) currently receives the funds it should – approximately 1% of all the taxes collected by São Paulo is transferred monthly to Fapesp. Other states have similar mechanisms to collect funds, but they are not being enforced by the governors.

Nevertheless, even São Paolo’s scientific community, which accounts for nearly half of the scientific articles published by Brazilian researchers in international journals, is feeling the impact of the federal budget reductions. Vanderlan Bolzani, a chemistry professor at Paulista State University in São Paulo, says Fapesp has been supporting research projects in her lab, but she explains that a significant portion of this work is carried out by graduate students who typically receive federal funding from agencies such as CNPq. ‘Without scholarships, we have less students and our laboratories are empty,’ Bolzani says.

During his presidential campaign last year, Jair Bolsonaro had pledged to increase the government’s support for science from 1.2% to 3% of the country’s GDP. But since his election in October 2018, researchers have been voicing concerns that his administration may seek to impoverish or even eliminate the country’s science ministry.

Beyond academia, the federal cutbacks will probably hit the country’s chemical industry as well, according to Peporine Lopes, with the sector losing out on training and development.