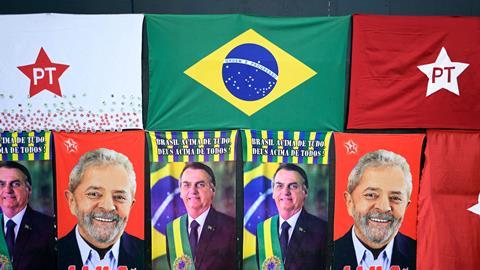 When populist Jair Bolsonaro was narrowly elected as Brazil’s new president four years ago, scientists and academics across the country were shaken. They were concerned that funding for research in Brazil would further dry up, along with academic freedoms, and the consensus among essentially all of them is that these fears have been realised.

As the country’s 30 October runoff election looms in which the incumbent is up against former president Luiz Inácio Lula da Silva, researchers across Brazil, including many chemists, are resolute in their support for the left-wing challenger.

‘The survival of universities in Brazil will really be compromised if Bolsonaro is re-elected,’ warns Fernando Cássio, a quantum chemist and education policy researcher at the Federal University of ABC in São Paulo. ‘The federal universities probably won’t be viable, but some of the state universities that are administered by state governments may survive,’ he adds. Right now his institution doesn’t have money to build new laboratories, or to maintain instruments, Cássio says. ‘Bolsonaro is truly [the] enemy of the universities,’ he adds. ‘He doesn’t like universities – the critical spirit, the free spirit – so he has waged an ideological war against them since his first day in office.’

After Bolsonaro’s election in 2018, researchers in the country reported being subjected to increasing threats. Pre-Covid-19, Bolsonaro also issued an order that limited attendance of Brazilian academics at international conferences, but protests resulted in its harshest provisions being dropped. A year ago, there were dire warnings that the country’s science budget was on the brink of evisceration. ‘If Bolsonaro is elected, this would be a huge disaster for science, for innovative industries in Brazil, and for the nation’s federal universities – the disregard for scientific evidence and universities will continue but it will be strengthened,’ says Luiz Davidovich, an emeritus physics professor at the Federal University of Rio de Janeiro and a former president of the Brazilian Academy of Sciences.

Aldo Zarbin, a materials chemistry professor at the Federal University of Paraná and former president of the Brazilian Chemical Society, agrees. ‘[Bolsonaro] has a clear project to destroy the public universities and the entire system of science and technology in Brazil, and he is doing it slowly and around the edges.’

Funding for electricity, water and other consumables at federal universities

Major research universities are now saying that they cannot pay for even the basics, like electricity and water. Funding for such basics at federal universities plummeted from R$11 billion (£1.8 billion) in 2013, to R$8 billion under Bolsonaro, and then less than R$4 billion in 2021, according to Davidovich.

The Brazilian government’s investment in its federal universities has tanked over the last two decades – falling steadily from a peak of around R$4.5 billion in 2011 and then dropping off a cliff after 2013 to reach R$1 billion in 2015, according to data adjusted for inflation from Sou Ciência at the Federal University of São Paulo. Support fell even more precipitously once Bolsonaro took office – hitting around R$200 million in 2019 and 2020, and then remaining unchanged in 2021. 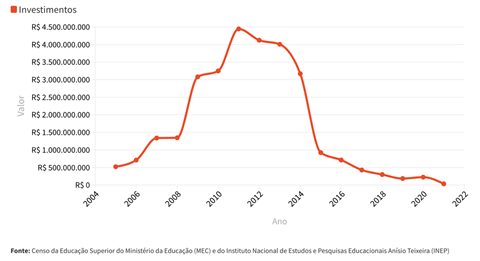 The cuts have crippled major agencies within Brazil’s science ministry, such as grant funder the National Council for Scientific and Technological Development (CNPq) and the Coordination for the Improvement of Higher Education Personnel (Capes), which sponsors training for new researchers.

The situation became so dismal that in 2017 nearly two dozen Nobel laureates wrote to former president Michel Temer warning about the state of Brazilian science and of a ‘brain drain’ that appeared underway.

Lula previously served two terms as president, between 2003 and 2011. He left office with an approval rating of more than 80%, despite being dogged by corruption scandals which saw him sent to prison in 2018. Lula was released early after a year-and-a-half in jail, after Brazil’s supreme court ruled that he and many others caught in a corruption investigation were improperly imprisoned before their appeal options had been exhausted.

‘Lula has some issues, some problems, but he is really committed to universities,’ Cássio states, noting that his own university was one of the many created during Lula’s eight years in power. ‘Lula truly has a positive vision of science and technology, and today we have a president who doesn’t believe in science and technology.’

Zarbin is adamant that no other president in Brazil’s history has invested more in science and technology than Lula. He also notes that he appointed an internationally-recognised scientist – physicist Sergio Rezende – as his science minister, and even established scientific committees to advise the government.

Mercedes Bustamante, an ecologist at the University of Brasilia, points out that Lula’s administration created programmes that successfully paved the way for students from underrepresented groups to enter the country’s universities.

‘If Lula is re-elected, he will have to deal with a Congress with a higher representation of the far-right, but at least scientists and academics will have more support from the executive branch,’ Bustamante states. She cautions, however, that brain drain is a concern. ‘Many talented young scientists will look for opportunities abroad if Brazil’s situation does not improve,’ Bustamante states.

A recent poll shows Lula leading Bolsonaro by 52% to 48%, but there is significant scepticism about such data. Bolsonaro reportedly has urged supporters not to cooperate with pollsters, and historically the polls have significantly underestimated Bolsonaro’s support.

On 18 October, the Brazilian Union of University Students, the National Union of Students and the National Association of Post-Graduates held protests against the policies of Bolsonaro in more than 20 states.

Cássio, who is the current president of the lecturer’s association at his university, attended the protest in São Paulo. ‘We were asking the government to stop budget cuts, we were asking for more funding for education and for science and technology, as well as for respect of academic freedom and the freedom of speech,’ he recalls. They are also seeking better working conditions for professors and other university employees, Cássio adds.

A petition is currently circulating among academics endorsing Lula for president. They accuse Bolsonaro of having ‘promoted a process of extinguishing’ science, technology and innovation in Brazil. ‘We can count the impact as we watch the exodus of young talent to other countries in search of better study and work conditions,’ reads the petition, which has gathered 14,000 signatures.

Bolsonaro has repeatedly claimed that Brazil’s electronic voting system is vulnerable to fraud, and many expect that he will challenge the election’s outcome if he loses. All eyes in Brazil, especially those of academics and researchers, will be trained on the results come 30 October.