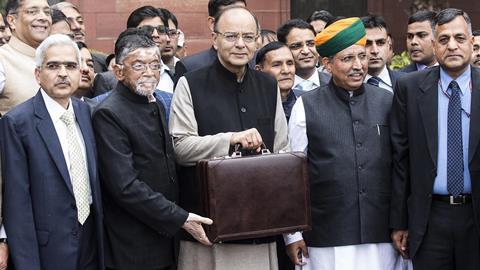 For the third year running under Narendra Modi’s government, science has received static funding in India’s latest budget. The news has caused disquiet among scientists worried by the fate of basic research.

The key departments engaged in scientific research, including the Ministry of Science and Technology, will receive INR348 billion (£4 billion) or an 11% hike in pledged funds over the previous year. Critics claim that this rise will mean science spending will only just keep pace with inflation. ‘This year not only follows the same trend of the past, but with more disillusionment,’ says Krishna Ganesh, director of the Indian Institute of Science Education and Research (IISER), Pune. This year’s low allocation is at odds with prime minister Modi’s announcement in January at the Indian Science Congress of making India a global power in science by 2022.

Unveiling the budget, finance minister Arun Jaitley said: ‘Emphasis will be given on science education and flexibility in the curriculum to promote creativity through local innovative content.’ However, no new ideas were proposed in the budget as to how to go about this. Jaitley also spoke of higher education reform, but only outlined a significant almost 60% hike in spending for Indian Institutes of Technology (IITs) – the country’s premier research institutes.

Only two departments in the science ministry – biotechnology and space – received relatively substantial increases of 22% and 21% respectively, signalling support for their ambitious programmes. The department of biotechnology launched a national strategy at the end of 2015, which aims to raise India’s biotech turnover from $7 billion (£5.5 billion) to $100 billion by 2025. ‘We plan to launch our new programmes in marine science research, and drugs and pharmaceuticals, besides supporting basic research,’ Department of Biotechnology secretary Krishnaswamy VijayRaghavan tells Chemistry World.

Meanwhile, in 2017 the department of space will launch further remote sensing and communication satellites, and prepare for its second moon mission scheduled for 2018.The science and technology department received a relatively meagre 7.7% hike, compared with previous years when it received heftier rises and saw the launch of 16 new programmes.

This is the third consecutive year that Modi’s government has dashed any hope in the science community of a major funding boost. In recent years the budget for basic science appears to be increasing in real terms, but ‘the actual percent increase every year is decreasing’, points out Ganesh. ‘This is no good.’

While India has opened up a large number of IISERs, IITs, central universities and a host of R&D institutes, attracting an estimated 600–700 young, talented scientists back to the country, ‘the amount of research funds to support such a large number of scientists has not gone up by the same proportion. The increase is paltry – to take care of inflationary trends,’ says Ganesh.

India’s investment in basic science has been hovering around 0.9% of GDP for the last decade, compared with advanced countries that invest about 2% of their GDP. Gautam Desiraju, professor of chemistry at the Indian Institute of Science, Bangalore, says this figure ‘is too low and needs to go up’.

‘Successive governments including the present one, in general, might have tended to shy away from heavy funding of projects, fearing that it may not all be spent in the required timeframe or could be misused,’ Desiraju adds. ‘Accountability of the use of funds is largely absent.’

The Indian government also tends to allot significant funding to a few well-known researchers, Desiraju notes. ‘Whereas, the country should fund a large number of smaller researchers/investigators with smaller grants, so that more innovative research ideas are pursued. The concept of big funds for a few projects is justified in mission-oriented research such as, say, the Mars mission, but not basic research funding.’