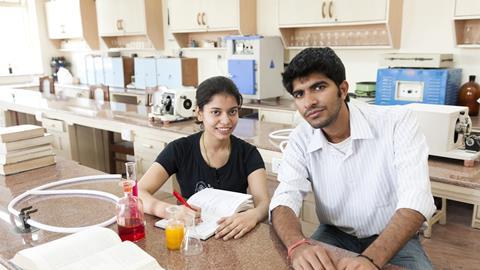 The number of quality chemistry research papers coming out of India is on the up, but still lags far behind China and must accelerate if India is to become a major global player in chemistry. That’s the conclusion of a new scientometric analysis of chemistry research in India that uses China’s explosive research growth as a benchmark. 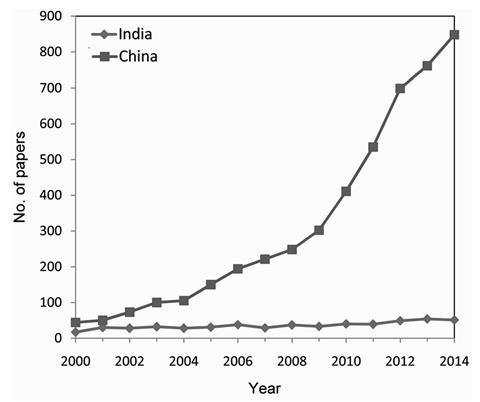 Number of papers from India and China in the top one percentile of the most highly cited chemistry papers. Data from Web of Science

While the total number of chemistry papers with Indian authors published between 2007 and 2014 grew at an impressive three-year moving average of 8.9%, the study shows that the country ‘continues to be poorly represented in the top journals’. This is despite India making up 17% of the world’s population. ‘When publications in only high quality journals are considered India’s rank falls, leading to the question “are we publishing mediocre stuff”?’ state the authors of the study.

Between 2011 and 2015 Indian chemists published 144 papers in the Journal of the American Chemical Society (JACS), the study notes, far behind China’s 1857. In another top journal, Chemical Communications, India accounted for 794 papers from 2011 through to 2015, compared to 6084 from China. The study notes that India accounts for only 2.3% of the 2234 papers in the top one percentile of the most highly cited chemistry papers published in 2014, compared to 38% from China, whose lead over India in 2000 was ‘meagre’.

‘That only a small number of Indian researchers and institutions publish in leading journals is also a matter for concern,’ the authors contend. ‘Despite an increase in research output and international collaboration, chemistry research in India is still not in the big league.’

The new study comes in the wake of three earlier prominent studies focusing on general science in India but which included sections on chemistry. Each of those three reports – from Nature Index, Elsevier, and Thomson Reuters – was largely positive on the current state of, and outlook, for chemistry in India.

Subbiah Arunachalam, lead author of the new report, tells Chemistry World that his study differs from the other three in several ways, most significantly by focusing only on chemistry and on papers published in top chemistry journals. ‘By such careful selection of journals, we ensured only papers of certain quality would be included in our analysis,’ he says. He says the study also presents a comparative data breakdown on papers from several Asian nations, as well as Indian institutions published in JACS, Chemical Communications and Angewandte Chemie. ‘We have also commented on the increase in internationally co-authored papers and their propensity to attract more citations.’ On the overall state of chemistry in India, Arunachalam says ‘I would say strengths certainly outweigh the weaknesses.’ 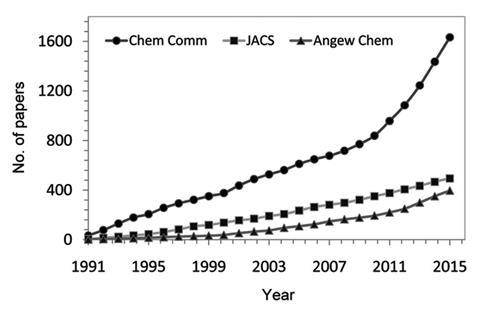 Sandeep Verma, head of the department of chemistry at the Indian Institute of Technology, says that the ‘strong suit’ of the study is its narrative based on quantitative data. ‘However, the authors summarily deliver a verdict that chemistry research is not making rapid progress in India based on the premise of publishing in JACS, Angewandte Chemie or Chem Comm. While these three journals are top of the line with high impact factors, one has to also consider “core” journals such as Organic Letters or Journal of Organic Chemistry, Inorganic Chemistry and Journal of Physical Chemistry, preferred widely by Indian chemists who feel comfortable within traditional boundaries.’

Verma concludes: ‘Therefore, the rhetoric of “are we publishing mediocre stuff” is high-handed and is based on an arguable premise. Thus, in my opinion, this paper presents a small part of a complex story of chemistry research in India.’

Abhishek Dey, an inorganic chemist at the Indian Association for the Cultivation of Science in Kolkata, notes that the study ‘does show that the younger scientists are publishing more in high impact journals’. However, he says another parameter the study could have included was ‘reviewing activity by these authors. It not only shows the credibility of the scientist as a go to expert but also shows their commitment towards the development of journals they publish in.’

‘I am quite hopeful about the future of chemistry in India,’ says Dey. ‘There has been a lot of really great appointments thanks to the new institutes that have come up. If these institutes can provide good academic environments to their faculty, chemistry research should get much better in the days to come. That being said, we still have a long way to go to be considered as a leader in the area.’

Verma agrees that ‘the future of Indian chemistry looks bright’. But he says the field needs more support from the Indian government, which he says favours the biological sciences over physical. ‘The numbers presented in this paper are actually a tribute to the resolute nature of Indian chemists given poor infrastructure as a main adversary impeding their reach to the top,’ he says. ‘Indian chemists will shine if optimal research resources and robust funding policies are made available on a priority basis.’