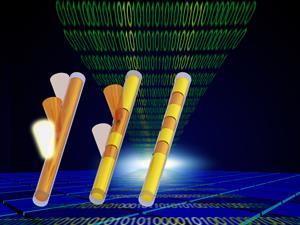 Scientists in China have made invisible barcodes, which could prove useful in the fight against fraud and theft, out of nanowires. 1000 times narrower than a human hair, their covert system is easily encoded, and read, with an electron beam.

Now, Yong Peng and coworkers from Lanzhou University have developed discrete fingerprints for inanimate materials. Depositing then heating tin-based alloys in a porous oxide shell forms nanowires with several discrete domains. Electron beam irradiation from a transmission electron microscope (TEM) can switch each domain between the alloy and the precipitated phase to individually code each nanowire. Aligning several encoded nanowires creates a more complex barcode pattern, which can be read using TEM. This represents a significant practical advantage over previous materials that require specially adapted instruments to encode and decode. 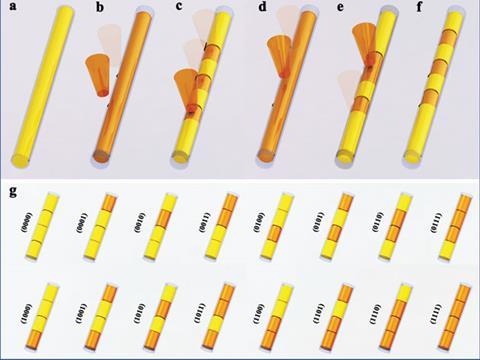 ‘It is nearly impossible to counterfeit fingerprints from our barcoded nanowires due to the difficulty in sculpturing the tiny nanowire into a desired pattern,’ explains team member Hong Zhang. Moreover, she adds that the general cost associated with the barcodes is feasible – using TEM to read the code is expensive, but is balanced by the low material cost – and the system could have wide-ranging uses in mobile phones, art and medicine.

However, it may be a little while before these nanowires are in everyday use. Shaowei Zhang, an expert in nanostructured materials at the University of Exeter, UK, says a major challenge will be to ‘improve the processing to achieve large-scale production of the nanowires.’ Hong Zhang acknowledges that further work is still needed to bring her barcode to market: ‘It is difficult to transfer the encoded nanowire to the target object so requires the development of nanomanipulators.’