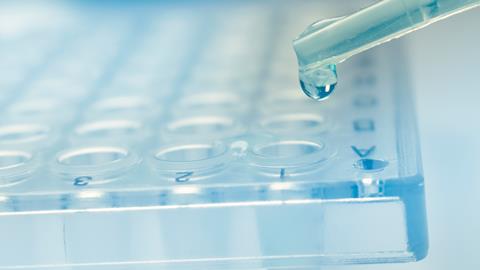 A Merck & Co drug has gained the first approval to treat cancer according to its genetic character, rather than type and location in patients’ bodies. This latest marketing go-ahead from the US Food and Drug Administration (FDA) for Keytruda (pembrolizumab) underlines the growing importance of a cancer’s genetic details for targeted treatments. ‘It does change in a major way how we think about getting drugs approved,’ says Roy Baynes, senior vice president, Global Clinical Development at Merck in Rahway, US.

The announcement is the most prominent in a flurry of news about treatments that harness the body’s immune system. Others include FDA approvals for use in bladder cancer for Keytruda, Bavencio (avelumab) from US-headquartered Pfizer and Germany’s Merck KGaA, and Imfinzi (durvalumab) from UK-headquartered AstraZeneca. Meanwhile, New York, US-based Bristol-Myers Squibb’s (BMS) Opdivo (nivolumab), which already had conditional approval in bladder cancer, has been granted FDA ‘priority review’ status in liver cancer. And in the UK, Keytruda will be paid for as a first-line lung cancer treatment under the country’s Cancer Drugs Fund.

The genetic biomarker Keytruda’s landmark approval considers is a high level of microsatellite instability (MSI-high) mutations, which are linked to flaws in cancer cells’ ability to repair DNA errors. The approach is currently a last ditch gambit for stubborn cancers, for example those progressing on previous drugs and solid tumours that can’t be removed by surgery. In five clinical trials treating 149 patients with relevant mutations across 15 cancer types, 59 partially responded or saw all signs of cancer disappear; 46 were still alive after six months.

Checkpoint inhibitor antibody drugs like Keytruda, Bavencio, Tecentriq, Opdivo and Imfinzi enhance the cell identification and destruction activity of lymphocytes in our immune systems. Healthy tissues protect themselves from attack during inflammation by making proteins that activate ‘checkpoint receptors’ on lymphocytes such as T-cells, sending them a calming message. While cancers can trigger inflammation, some also make the same calming proteins. Antibody drugs can therefore block the calming message sent to programmed cell death 1 (PD-1) checkpoint receptors by tumours and healthy tissues by its ligand protein PD-L1.

Baynes tells Chemistry World that 2–5% of all cancers fit the MSI-high profile. MSI-high cells usually also have many other mutations, which cause them to make new antigen proteins that trigger inflammation and attract T-cells. Blocking checkpoint receptor interactions ligand proteins like PD-L1 unleashes the immune system to destroy these cells.

Alan Melcher from the Institute of Cancer Research in London agrees with Baynes that the approval is significant. However, scientists still don’t know exactly why checkpoint inhibitors don’t work for everyone. Approving Keytruda to treat patients according to genetic biomarkers results from exploring this, Melcher says. ‘Patients that have a lot of mutations in their cancer respond particularly well,’ he explains.

Meanwhile, the list of cancers the FDA has approved checkpoint inhibitors for has steadily grown. They were initially approved in metastatic melanoma skin cancers in cases when patients had few other options. Now, Baynes highlights, Keytruda is approved for use in metastatic melanoma as the first-line therapy. It can now be used in previously untreated lung cancer patients, if their tumours have enough PD-L1, head and neck cancer, Hodgkin’s disease, and now bladder cancer. Merck has just filed for FDA approval in gastric cancer, Baynes says, and has over 500 immuno-oncology trials on-going.

The fast-track priority review of BMS’s Opdivo as a second-line treatment in hepatocellular carcinoma (HCC) patients now could bring checkpoint inhibitors into liver cancer. Just 15% of patients responded in the trial the review will consider.1 Nevertheless, BMS spokesperson Audrey Abernathy emphasises median overall survival on Opdivo was 15 months, compared with 10–11 with currently available HCC treatments. ‘Therefore, these data provide hope for Opdivo to extend patient’s lives,’ she says. Abernathy also emphasises that just 2% of patients in the trial dropped out due to drug toxicity.

This balance between toxicity and benefit is one reason for checkpoint inhibitors’ success, Melcher says. By contrast, Juno’s decision to halt work on its lead product after deaths in its trials show CAR-T therapy hasn’t yet demonstrated a similar tolerability. The approach sees companies extract T-cells from patients and insert a gene that adds a chimeric antigen receptor (CAR) to their surface. They then return these CAR-T cells to patients’ bodies, where they attack cells carrying the antigen it’s been engineered to recognise. The attacks should predominantly target cancer, but also risk dangerous side-effects. ‘In a trial for acute lymphoblastic leukaemia cell therapy has proved very effective, but for Juno this difficult balance has not proven to come through,’ comments Melcher.

Tecentriq’s failure in a phase III trial bladder cancer trial meant to confirm its earlier conditional approval is ‘a little bit surprising’, Melcher observes. ‘Is it completely over? I don’t think so,’ he adds. One complication was that Roche saw a higher than expected response rate in the trial’s chemotherapy comparison arm. However Melcher stresses that while some setbacks are inevitable, ‘immunotherapy as a whole is still a remarkable success story that has an awfully long way to go’.