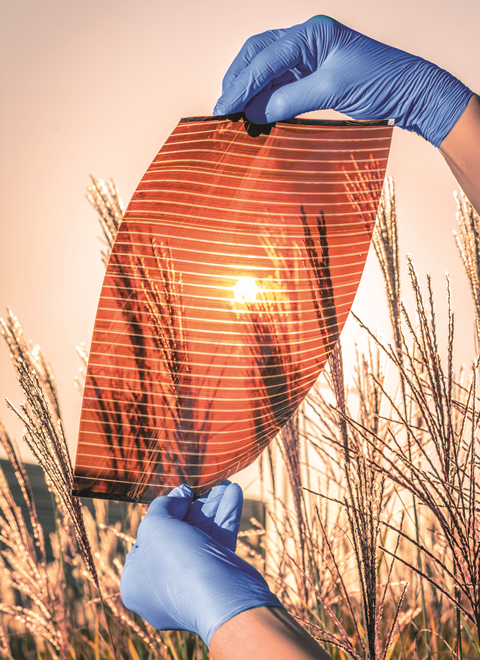 Construction company Skanska’s Warsaw, Poland, office is lighting up its workers’ lives with electricity from a perovskite photovoltaic (PV) panel in a pioneering real-world deployment. The 1.3m × 0.9m panel, made by Warsaw-based Saule Technologies, contains 52 modules and seeks to cover the energy needed to light one employee’s workspace for eight hours.

Saule is developing solar cells exploiting hybrid organic–inorganic materials with perovskite structures, typically alkylammonium lead halides, as the active layer converting sunlight to electricity. Several companies and many academics are working on the technology, attracted by the unprecedented speed of efficiency improvements since its invention in 2008.

The technology’s youth means that performance has mostly been measured on experimental devices notes Joseph Berry from the independent US National Renewable Energy Laboratory. ‘Anybody who’s putting some of these devices out in real-world test conditions and seeing what happens, that’s a way to generate really important data that will definitely put us in a better place,’ he says. ‘In that sense, what they’re doing is definitely exciting.’

The world’s first, large scale prototype production line, located in Wroclaw, Poland, will be ready at the end of 2019

Saule is unusual in its focus on extremely thin cells that can be flexible, although this prototype is not, and very lightweight, at just 500g/m2. Wojciechowski explains that to be able to produce such thin cells in a way that could scale up to mass production Saule uses ink-jet printing. Its chemists formulate inks so that every layer of different material in the cell has the right properties to produce and transport electrons when light is shone on them. They have also optimised parameters for printing, and then drying and heating the thin films so that the materials crystallise.

Stability not a bogeyman

‘From the beginning of our development work we have focused on chemistries and processes which are feasible for large scale manufacturing in order to mitigate the challenges related to the scale-up process,’ Wojciechowski tells Chemistry World. ‘We have been using industrial print heads from the beginning of our R&D work, which allowed us to establish printing specifications which could be directly transferred to the industrial manufacturing facility.’ 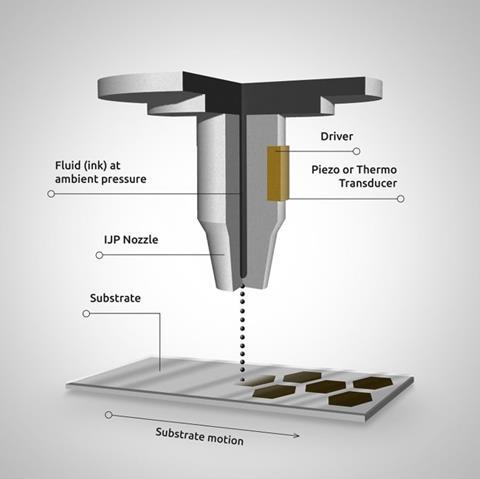 Saule intends to work towards making its BIPV modules transparent so that they can replace windows, applying coatings as pixels with gaps for light to pass through in between. While this means the modules can generate less power in total, it enables solar power to be deployed in new places.

Perhaps perovskite solar cells’ major weakness is a lack of stability, with the hybrid organic-inorganic material prone to degradation by water. Wojciechowski also says that Saule’s printed modules have ‘achieved great progress’ in this area, by passing the first targets in accelerated aging. However, he admits that they have not yet proven that they can meet industrial reliability requirements for demanding power-generation applications. The company expects to have commercial products available in 2021.

Berry does see stability as a key challenge for perovskites, but stresses that it should be seen in context. ‘The challenge of stability is not exclusive to perovskites,’ he underlines. Berry says the issue is ‘more a statement of how quickly they’ve become efficient than it is to say stability is this big bogeyman for the technology’.

Saule’s next step is launching a fully-automated pilot production line for making large perovskite modules, Wojciechowski says. The company then hopes to work with different industrial partners to develop products based on flexible perovskite PV technology, such as putting them on cars, industrial rooftops and small electronic devices.

UK-headquartered Oxford PV has improved its method for coating a hybrid organic–inorganic perovskite-based layer on top of a traditional silicon solar cell to attain a new efficiency record. Using this ‘tandem’ approach the company produced a 28% conversion efficiency, 1cm2 cell, certified by the US National Renewable Energy Laboratory.

Rather than compete with silicon solar cells, Oxford PV is using perovskite materials to enhance them

‘We are continuing to push our perovskite-silicon solar cell technology, with a roadmap that extends beyond 30% efficiency,’ says Chris Case, Oxford PV’s chief technology officer. ‘The solar cells we are developing are not only efficient but also stable.’

Oxford PV uses the tandem approach to enhance efficiency of existing solar panel technologies, rather than to compete against them. The company is already producing 300mm x 300mm cells at a thin-film development line facility in Brandenburg, Germany, which it purchased from electronics and engineering giant Bosch in 2016.