Planar fivefold bonding with silicon and germanium at the centre

Chemists have used computational techniques to demonstrate the stability of molecular species based on planar pentacoordinate silicon or germanium. These are the first such structures to be centred around these elements, and provide analogues to similar carbon-centred species.1

Methane molecules exemplify two orthodoxies of carbon – that its coordination number should not exceed four, and when that number is four, a tetrahedron results. But carbon can be persuaded to lie flat, and even to take on additional bonding partners. Such eccentric arrangements have been hypothesised and glimpsed for decades, and in 2008, researchers used simulations to show that a planar pentacoordinate carbon, CAl5+, finds energetic favour over its isomers.2

But while carbon indulges in these occasional flat, five-friended forms, such behaviour has not been known among its heavier group-14 cousins – until now. ‘It’s somehow striking because silicon is in the same group as carbon,’ says Jorge Barroso, a PhD student at the Centre for Research and Advanced Studies (Cinvestav), in Mexico. ‘So we should expect it to behave somehow similar to carbon.’ 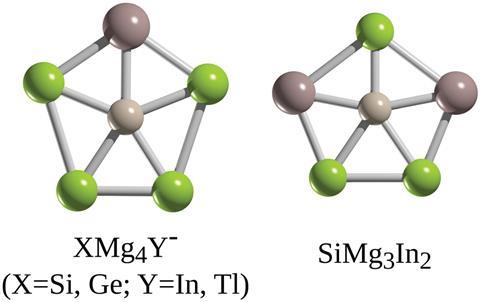 Barroso and fellow scientists at Cinvestav, working with researchers at Jilin University in China, have caught not only silicon in the act, but germanium too. Using computational techniques, the researchers have found five planar pentacoordinate structures – XMg4Y-, where X can be either Si or Ge, and Y either In or Tl; and also SiMg3In2 – that are global energy minima over their respective isomers.

The scientists used density functional theory and molecular dynamics simulations to probe the stability of candidate structures. Their hunt combined trial and error with detective work based on likely suspects. Surrounding a silicon or germanium atom with five alkaline earths seemed a promising starting point, and the researchers did find planar pentacoordinate XMg52- to be a local energy minimum. However, its energy was not as low as some other arrangements the atoms might make.

Despite not meeting the mark, XMg52- became the template for the next stage of the investigation. Taking previous work on planar carbons as a cue, Barroso and his colleagues considered the effect of substituting one or more magnesium atoms with a more electronegative element from group 13.

‘The idea was that if we include one atom that is more electronegative, we would enhance the centre, in this case silicon or germanium, and that bond would be stronger,’ says Barroso. ‘And that’s exactly what happened for the case of indium and thallium.’

The simulations showed that either substituent could stabilise a silicon or germanium centre. The scientists went further, asking if two substitutions might also do the trick. The answer was yes, but only with silicon at the centre and indium atoms on the rim.

Intriguing oddities in their own right, the planar species might one day be of practical use. Two-dimensional materials are rising stars in applications such as battery electrodes and solar cells. The researchers note that silicon has advantages over carbon in synthesising such materials.

John McGrady, leader of the computational inorganic chemistry group at the University of Oxford, UK, takes a more cautious view. ‘You can invent molecules that may or may not exist and discuss potentially exciting properties,’ he says. ‘But without any tangible evidence that they may ever exist, it becomes a little speculative.’

McGrady notes, however, that the researchers have predicted the energetic signature by which their creations, if ever realised, can be recognised. ‘If these are ever to be made, they would be made by a gas-phase spectroscopist, who would probably then measure those ionisation energies.’