The interior surfaces of fullerenes allow researchers the opportunity to isolate otherwise unstable metallic clusters. Now, a team of scientists from China and Germany has reported a new example of a fullerene cage stabilising a trimetallic carbide cluster, which features an unprecedented example of an all-lanthanide three-centre single-electron bond. 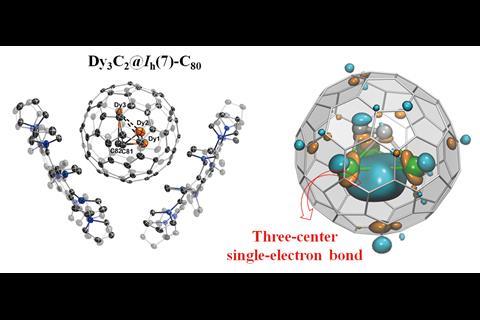 Source: © Shangfeng Yang/University of Science and Technology of China 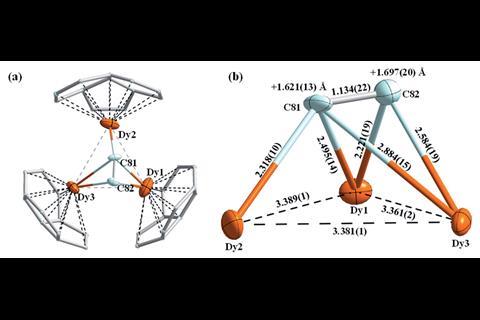 Source: © Shangfeng Yang/University of Science and Technology of China

Shangfeng Yang from Hefei University of Science and Technology and colleagues used a common method to prepare their unusual trimetallic carbide clusterfullerene. Following arc discharge of a graphite and Dy2O3 mixture they were able to isolate Dy3C2@C80 by HPLC, which they could then co-crystallise with a corannulene-based host.

The researchers used x-ray crystallography to unambiguously locate the Dy3C2 cluster within the fullerene cage. However, their computational analysis revealed something quite unusual; the cluster contains a three-centre single-electron Dy–Dy–Dy bond, a bonding motif never before seen in molecular lanthanide chemistry.