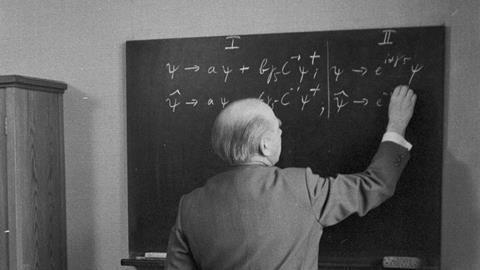 The motion of an optically trapped glass bead has been slowed down to the state of lowest possible energy using two methods developed independently by teams in Austria and Switzerland. ‘These two works achieved the highest precision in controlling and measuring levitated nanoparticle optomechanical systems close to the Heisenberg limit, which is the ultimate bound set by quantum mechanics,’ says optical physicist Jianming Wen from Kennesaw State University in the US.

According to Heisenberg’s uncertainty principle, the location and state of motion of a particle can’t be determined simultaneously with infinite precision. Wen explains that the methods minimise undesired effects that are intrinsically associated with the experiments. 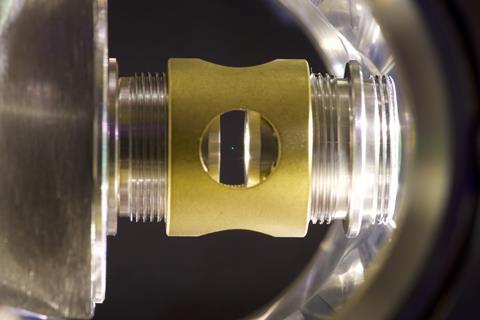 ‘This is the first time that the movement of a large object at room temperature is controlled with such a precision that we can observe its quantum motion in real time,’ says Lorenzo Magrini from the University of Vienna, one of the members of the Austrian team. He points out that the glass spheres used in the experiments have a diameter of about 150nm and are made of billions of atoms. ‘Controlling the quantum motion of such complex systems is important to understand the role of quantum mechanics at macroscopic scales.’

Up to now, such studies have been limited to objects containing only a few thousand atoms, although investigations on a larger system were recently reported using an arrangement of mirrors known as an optical cavity. ‘A key feature of these two works is that they don’t place the beads in an optical cavity, which greatly reduces the complexity of the setup,’ comments André Xuereb , who works with optical cavities at the University of Malta. ‘Scientists can apply these control methods to manipulate much larger objects without worrying about compatibility with operating in a cavity.’ 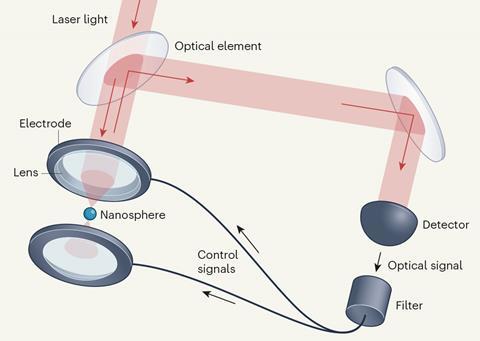 After the glass bead is trapped by a laser beam, the sphere’s oscillatory motion is slowed down using a finely tuned electric field

In their experiments, the scientists sprayed tiny glass spheres across an optical trap consisting of a strongly focused laser beam until one of the particles was trapped. ‘The authors of these works used optical microscopes to measure the position of the nanoparticle with extreme precision,’ explains Steven Girvin, a professor of physics at Yale University in the US. ‘From a succession of such measurements, they were able to determine what force should be applied to the object to cool the motion down close to the quantum mechanical ground state.’

Both teams used the same cooling technique that is ‘rather similar to a parent watching their kid on a swing and pushing it in such a way that it swings higher –just that we are interested in stopping the swing’, explains Felix Tebbenjohanns, a researcher at ETH Zurich and part of the Swiss team. ‘In both experiments, the particle is cooled to about a millionth of a degree above absolute zero,’ Magrini says. However, each team uses a different tactic to achieve this cooling. ‘While Magrini and colleagues developed an extremely versatile and adaptable feedback mechanism to cool the particle, we focused on its environment and cooled the background gas cryogenically,’ explains Tebbenjohanns. 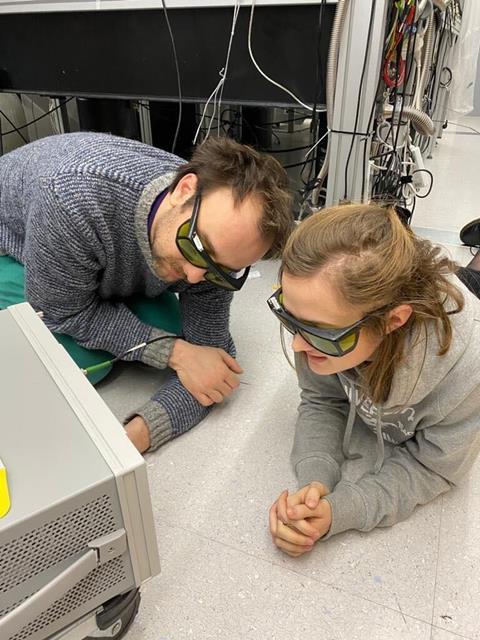 Lorenzo Magrini (left) and Constanze Bach (right), who work with Markus Aspelmeyer at the University of Vienna, monitor the experiment

The feedback mechanism introduced by the Austrian team is based on a system called a Kalman filter. ‘This carefully tuned algorithm estimates the state of motion of the particle, calculates how much force is needed at each instant to slow it down, and adjusts the electric field that exerts that force on the particle,’ explains Austrian team member Andreas Deutschmann-Olek, who is based at TU Wien.

Girvin believes that the accuracy achieved with the new methods could have important uses in computation, sensing and communication. ‘The position of a particle can, for example, be used as a transducer to measure tiny accelerations and sense tiny changes in electric and magnetic fields,’ he says. ‘Someday it may even become possible to test different theories of quantum gravity, though this is quite remote at present.’