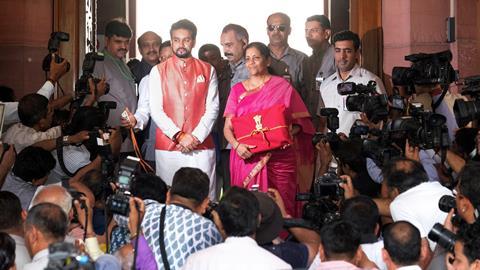 Funding overhauled in India as new umbrella body set up

India has embarked on an ambitious path to bring all funding and mentoring initiatives across every academic discipline in the country under a single funder – the National Research Foundation (NRF), modelled on the US National Science Foundation.

The NRF is part of the Indian government’s overhaul of the higher education system. A high-powered committee led by space scientist Krishnaswamy Kasturirangan had recommended setting up the NRF under the proposed National Education Policy 2019 (NEP) to reinvigorate research and innovation across all academic disciplines, with a special focus on universities and colleges.

Last month, finance minister Nirmala Sitharaman announced the setting up of the NRF. ‘It will ensure that the overall research ecosystem is strengthened, with a focus on identified thrust areas relevant to our national priorities, and towards basic science, without duplication of effort and expenditure,’ she said. ‘The NRF will assimilate the research grants being given by various ministries independent of each other. This will be adequately supplemented with additional funds as well.’

Although the minister did not provide details about the NRF’s budget, the NEP recommended that around INR210 billion (£2.5 billion) per year should be allocated during the initial phase.

Currently, the funding landscape in India is fragmented as several departments administer schemes and initiatives, which the government says results in a lack of interdisciplinary work and duplication of effort. There is also limited coordination among stakeholders to tackle national challenges.

In addition, there is a wide gap in research excellence between centrally-funded premier institutes such as the Indian Institute of Science and the Indian Institutes of Technology, and the more traditional state-run universities and colleges that do not have the funds or infrastructure to carry out research.

Earlier this year, Prime Minister Narendra Modi raised concerns about the poor condition of research facilities at state universities and colleges, which make up around 95% of higher education institutes in the country.

The NRF, chaired by Modi, will fund individual projects, collaborative or group projects and capacity-building initiatives, as well as transformative mega-projects or ‘moonshots’.

The NRF plans to strengthen India’s investment in research. Unfortunately, India’s research and innovation investment has steadily dropped over the last decade – from 0.84% of GDP in 2008 to around 0.69% in 2014. In contrast, research powerhouses such as the US, China and South Korea invest 2.8%, 2.1% and 4.2% of their GDP, respectively.

Consistent underinvestment in science is reflected in research output numbers and patent applications. India lags far behind China and the US.

However, India is faring better in terms of scientific publications as its share has increased from 3.1% to 4.4%. Though, compared to world leaders, it is still far behind. A 2018 compilation of Science and Engineering indicators by the US National Science Foundation showed that both the US and China published at least four times as many articles as India in 2016.

Kasturirangan said the NRF will focus on funding research within the education system, primarily at colleges and universities. The NRF plans to run a special programme till 2040 to help state universities improve their research capabilities and offer around 1000 postdoc and PhD positions every year.

Scientists have largely welcomed the setting up of the NRF, which will help to address global challenges such as sustainability, health and energy. Dr Vishal Sardeshpande, a social entrepreneur and adjunct faculty at IIT Bombay, expressed happiness over the NEP recommendation for strong academia-industry partnerships, hopes that the NRF programmes lead to measurable impact on the ground, driving the economy – in terms of innovation, entrepreneurship and scalability of research solutions.

But some have expressed concern regarding the government’s intention to redirect all research funding from different departments to the NRF to create a huge monolithic organisation. There is no clarity in the NEP on what will become of the existing government departments and agencies that are responsible for research funding once the NRF has been set up. A senior scientist, who wished to remain anonymous, tells Chemistry World: ‘We are a diverse nation and [the current] diversity of funding opportunities is good for scientists.’