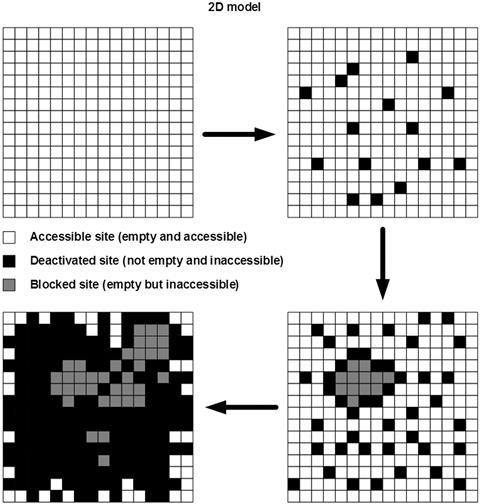 The empty zeolite pores (white) become clogged by coke (black). Once an area (grey) is surrounded by clogged pores, it becomes inaccessible and inactive, despite not being blocked

Taking inspiration from the ancient board game Go, researchers from China have built a model to show how porous zeolite catalysts become clogged by carbon deposits. The model helps establish reaction conditions that minimise catalyst deactivation.

Zeolites are porous aluminosilicate minerals that are key catalysts in industry due to their unique structure. Their vast array of pores traps molecules in close proximity to each other, enabling chemical reactions to readily take place. However, these pores can just as easily be clogged up and blocked by carbon deposits, or coke, that form during a reaction, meaning the zeolite is deactivated. To prevent this from happening, scientists need to understand when and where coke forms – but there is little quantitative data relating reaction conditions to coke formation.

Fei Wei and his team from Tsinghua University have developed a model, inspired by the rules of the board game Go, to build up a picture of how zeolites become deactivated by coke. Wei spoke to Chemistry World about how watching the 2016 match between Go player Lee Sedol and computer program AlphaGo inspired their model. ‘While watching these battles and staring at the board, we suddenly captured the similarity between the board and zeolite channels, and the similarity between Go rules and deactivation rules,’ he says.

One of the rules of Go states that when a token is immediately surrounded in all directions by tokens of the opponent’s colour, it must be removed from the board. Wei’s team noted the similarity between this and empty zeolite pores that are surrounded in all directions by blocked sites. While the pore may actually be empty, the blocked sites around it make it inaccessible to reactants.

This analogy led to a model that shows good consistency with experimental results obtained from a specific zeolite catalyst, ZSM-12.The team then predicted the optimal acid density level (66%) of a different zeolite, SAPO-34, to ensure that a maximum number of active sites are accessible to reactant molecules. SAPO-34 is used industrially to convert methanol to alkenes, which in turn are the basis for many useful products, such as plastics or carbon-based fuels.

Catalysis expert Bert Weckhuysen of Utrecht University, the Netherlands, remarks: ‘The developed method is very interesting and elegant. It certainly will be useful for researchers interested in validating their experimental data on catalyst deactivation with a theoretical model. I directly see a lot of potential applications; for example, to model our recently published data on hydrocarbon deposits formed within zeolite crystals.’