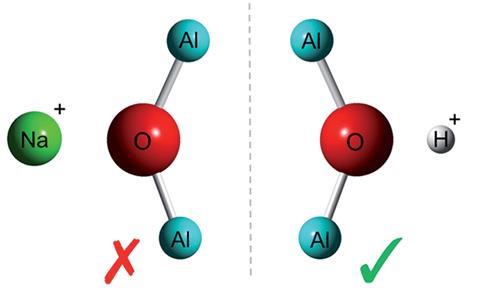 Theorists in the UK have studied the aluminium distribution in a number of catalytically active zeolite species, finding evidence that –Al–O–Al– linkages could exist in some zeolite species after all.1

Since Löwenstein first published his study on ‘the distribution of aluminium in the tetrahedra of silicates and aluminates’ in 1954,2 scientists had generally accepted that aluminium clusters cannot exist within zeolite structures. Löwenstein’s rule of ‘aluminium avoidance’ states that whenever two tetrahedra are linked by an oxygen bridge, if the centre of one is occupied by an aluminium atom, the other must be occupied by silicon. As such, Löwenstein’s rule prohibits –Al–O–Al– linkages from occurring within zeolites, and dictates that the ratio of Al:Si in zeolites must be 1:1.

‘One of the first things you learn about these materials in undergraduate chemistry is that these aluminium linkages don’t exist in a zeolite,’ states Ben Slater from University College London. However, upon performing detailed periodic density functional theory (DFT) calculations on a number of catalytically active zeolite systems, Slater and his team observed a thermodynamic preference for Al3+ atoms to sit adjacent to one another bridged by a hydroxyl group, effectively challenging widely held assumptions about how atoms are arranged in zeolitic materials.

The zeolite in question, SSZ-13, has industrial applications as a catalyst for converting methanol into alkenes and selectively reducing nitrogen oxides. Slater’s team studied both the sodium-containing and protonated form of SSZ-13, the latter of which is catalytically active. ‘The value of the computation is that we placed the atoms, so we know precisely where they are in space and in the material,’ says Slater. ‘When you make a compound you don’t know the exact location of the atoms and therefore you can’t make inferences between activity and the location of the aluminium.’

Current characterisation techniques are unable to distinguish between the silicon framework and aluminium. ‘Aluminium is associated with the catalytically active component of the material, so if we know where the active sites are, then we can understand why these are effective catalysts and then use this knowledge to make them better still,’ explains Slater. 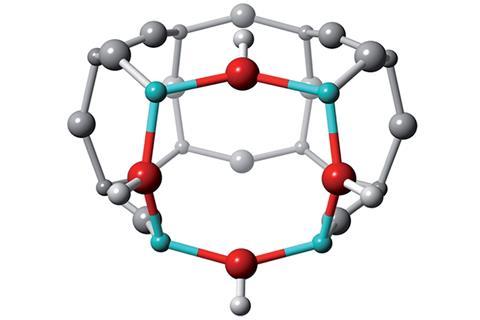 Generally, zeolites are synthesised by a 2-step process where aluminium is already locked into a Löwensteinian configuration. In this work, Slater says they are ‘encouraging experimentalists to think of ways in which they might approach the synthesis of zeolites differently to directly make the protonated active form of the catalyst where non-Löwenstein linkages exist. Through this, the material itself would be more stable, making it a more durable catalyst, which will enhance its longevity.’

Carlo Lamberti, a materials expert at the University of Turin, Italy, thinks the work will have a high impact on fundamental and applied grounds: ‘It is clear that this study will generate a huge debate in the zeolite community, opening up a discussion of some important questions. Are there aluminium linkages in existing zeolites that have escaped experimental detection so far? Can we act on the proposed syntheses to realise these linkages and increase their population relative to standard isolated aluminium sites? Finally, can we envisage refined characterisation techniques that would allow us to discriminate the possible presence of such non-Löwensteinian linkages?’