Gas trap could drive down cost of key commodity chemical 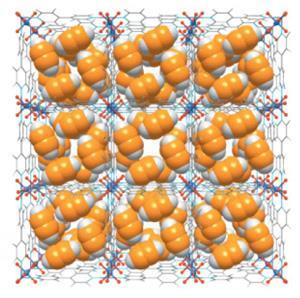 Two new materials that can separate acetylene from ethylene have been made. The discovery opens up a way to replace energy intensive separation processes and thereby reduce the cost and carbon footprint of ethylene – more of which is produced than any other organic compound in the world.1 The absorption materials are members of a class of SIFSIX materials, which has previously been shown to be extremely effective for carbon capture.

Ethylene is produced in a multi-step process by cracking petroleum. However, the ethylene becomes contaminated with acetylene during the process. ‘At the very last step, they have to remove the acetylene, because it’s a poison for polymerisation catalysts,’ explains crystal engineer Michael Zaworotko of the University of Limerick in Ireland, a member of the team behind the new work.

As the two molecules have similar molecular weights and chemical properties separation is difficult. Several techniques are in use, but these generally require a lot of energy. ‘The current technology is to hydrogenate the acetylene to transform it into ethylene,’ explains another member of the team, materials scientist Banglin Chen of the University of Texas at San Antonio, US. ‘On the other hand, some of the ethylene will be hydrogenated to ethane.’ Selective adsorption of the acetylene could be chemically and energetically far more efficient, but the candidate adsorbents tested so far have shown either low uptake or insufficient specificity.

SIFSIX materials comprise two-dimensional metal–organic frameworks linked together by SiF6– anions, creating a porous structure with highly attractive, inorganic pore walls. Zaworotko, who developed the first SIFSIX material in 1995, discovered in 2013 that SIFSIX materials showed unprecedented carbon dioxide trapping properties.2 Investigating SIFSIX materials for adsorbing other gases the researchers found that SIFSIX-2-Cu-i was best for extracting acetylene from ethylene mixtures containing just 1% acetylene, showing good uptake and the highest selectivity for acetylene ever recorded, whereas a third material, SIFSIX-1-Cu, was even better at adsorbing acetylene from 50/50 mixtures. ’There’s a very clear message when you look at this paper and the Nature paper that these SIFSIX compounds are really something special,’ says Zaworotko.

Omar Yaghi of the University of California, Berkeley in the US is impressed. ‘This is a nice piece of work,’ he says. ‘The researchers use the power of metal–organic frameworks to tailor the pores both electronically and sterically to selectively remove acetylene from ethylene. It’s an important contribution and an important demonstration of the power of controlling things on the molecular level.’