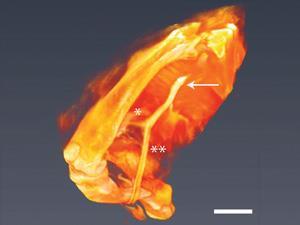 The researchers used their hydrogel to successfully suture a mouse's femoral artery (arrow), which is about as thick as a human

Carrying out complex surgical procedures on children means that tiny blood vessels need to be stitched together – a task that requires a skilled surgeon and yet is still prone to failure. One of the principal difficulties is that when such tiny veins and arteries are deprived of blood the walls often collapse. Now, researchers in the US have developed a hydrogel that keeps the ends firm and holds them together while the surgeon sutures them.

The difficulties of suturing tiny blood vessels have led to a variety of ways of connecting them, including the use of cuffs and coupler devices. Suturing, in which a tiny needle joins the vessels with a polymer thread thinner than a hair, remains the gold standard because of its reliability and flexibility, but it is extremely difficult to suture vessels less than 1mm in diameter.

Scientists at the National Cancer Institute and Johns Hopkins University School of Medicine, both in Maryland, designed a hydrogel comprising peptides that self-assemble into a hydrogen-bonded matrix. The hydrogel displays a property called shear-thinning, which allows it to liquefy when injected through a needle into the ends of collapsed blood vessels that need to be joined. Once injected, it turns back into a gel, holding the cut ends together and supporting the vessel walls while a surgeon sutures them. When the procedure is complete, ultraviolet light can be used to photolyse the peptide chains, triggering an irreversible gel-sol phase transition that opens the vessel, allowing blood to flow.

The researchers tested the dye out by using it to suture together a cut in the femoral artery of a mouse, which is approximately 200µm in diameter. ?icro-CT imaging showed that a contrast agent spread through the limb of a mouse on which the procedure had been performed just as well as through a limb on which the femoral artery had been left undisturbed. They also found that, while the surgical procedure inevitably produced an inflammatory response, the use of a dye did not exacerbate this, suggesting that the dye was non-toxic. ‘We believe this has potential for fairly rapid translation [into the clinic] because, in their fundamental principles, these gels are already FDA [US Food and Drug Administration] approved,’ says team member Gerald Brandacher, a transplant surgeon at Johns Hopkins.

‘I think this has some merit in it,’ says biomedical engineer Riyi Shi of Purdue University in Indiana. He cautions, however, that many of the problems with traditional suturing, such as inflammatory responses to the perforations, are inherent to the technique itself.