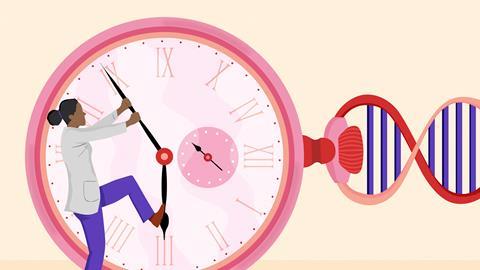 Mice receiving a gene for a telomere-building enzyme have had their lifespan extended by 41%. Treatment with another gene, this time for follistatin (FST), extended their lives by 36%. Both treatments significantly boosted glucose tolerance, physical performance and stalled body mass decline and fur loss.

The life extension came as a surprise to the researchers. ‘We wanted to see what the effects were [of the gene therapy],’ explains Hua Zhu at Rutgers New Jersey Medical School. ‘In the meantime, we saw that the [24] control mice died, whereas all [36] experimental mice were still alive, so the treatment clearly was significantly increasing the lifespan of the mice.’

Telomeres are repetitive DNA sequences that cap chromosomes and tend to shorten with ageing. Efforts to extend the healthy lifespan of people is an active area of research, and features a range of techniques such as caloric restriction and small molecules that target metabolic pathways linked to ageing.

The researchers delivered the gene for telomerase reverse transcriptase, which activates and encourages telomere lengthening, and FST, a secretory protein with an important role in muscle development and maintenance, using a herpes virus.

Monthly treatment began in mice aged 18 months. After two months, the treated mice looked stronger and had shinier, healthier fur than controls, which started to lose their fur and suffered declining body weight, notes Zhu. Injections were repeated monthly to sustain high levels of the protein. All mice in control groups died by 29 months, while the mice in the experimental groups died between 38 and 42 months.

Liz Parrish, chief executive of the biotech firm BioViva that provided funding for the research, notes that the next step will be to test the safety and efficacy of the gene therapy in monkeys using weakened strains of a rhesus virus. ‘Based on the result of the monkey studies, we will submit our report to the [US Food and Drug Administration] to give us permission to start clinical trials in humans,’ she explains.

Bellantuono says that it is still hard for any treatment for ageing to compete with diet and exercise. Therefore, the best approach would be to target an age-related condition such as muscle loss or dementia, she says. This would require a clinical trial to test whether the intervention prevents such conditions.

‘A preventive trial is very complex. You need to give the treatment. Then wait for the disease to manifest,’ says Bellantuono. ‘You would need biomarkers, which would tell us within three to six months whether an intervention gene therapy or drug is working.’

Peter Lansdorp, a molecular biologist at the University of British Columbia in Canada, notes that ageing is multi-factorial and it seems unlikely that a single protein could have such a large impact on lifespan. He notes also that side effects from repeated activation of the immune system by viral vector infection are of concern in humans, but not so much in mice. ‘First, possible effects of the transgene on viral virulence need to be excluded,’ Lansdorp says. ‘Next this study needs to be reproduced in mice by other, independent groups.’