A series of giant supramolecular ‘supersnowflakes’ have been synthesised. These huge structures are composed of multiple terpyridine (tpy) ligands, built up in a stepwise fashion using multiple components.

Where most other supersnowflakes have been limited to a combination of two types of ligand, Xiaopeng Li and his colleagues have been able to scale up this model. Li’s team were able to use three different types of tpy ligand along with two separate metal ions. 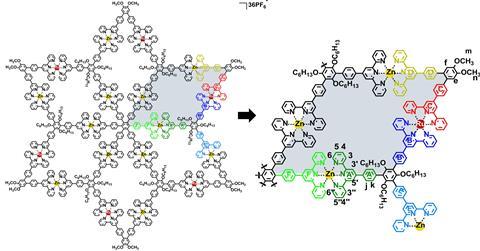 The supersnowflakes self-assemble and are remarkably stable

In order to generate a supersnowflake of this size, a stepwise approach was taken to allow multiple ligand combinations to self-assemble. The ligands were bridged through ruthenium in order to form the metal–organic ligands. These then underwent self-assembly with another ligand and zinc nitrate in order to form the final molecule. The average supersnowflake came in at over 20,000 Daltons having the molecular composition [(C137H117N15O5)6(C132H84N18)-Zn12Ru6(PF6)36].

The huge supersnowflakes were made possible thanks to the stability of the ruthenium(II)–organic complexes, and the weak coordination of the zinc(II) ions. These factors combine to make the overall molecule remarkably stable – a property that was confirmed with both mass spectrometry and NMR.