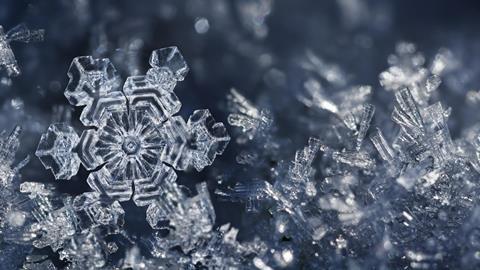 Measurements of perfect ice crystals have revealed that kinetic parameters controlling the growth of snowflakes from water vapour result in their iconic shape.

The connection between the macroscopic shape of certain crystals such as ice and the arrangement of individual molecules within their structure is not always obvious. Crystal growth is influenced by different parameters such as thermodynamic or kinetic factors, or even mechanical stress.

Now, Mary Jane Shultz from Tufts University, US, and her team have shown that the arrangement of water molecules in ice Ih – the type that forms snowflakes – is directly responsible for the formation of macroscopic six-sided crystals. 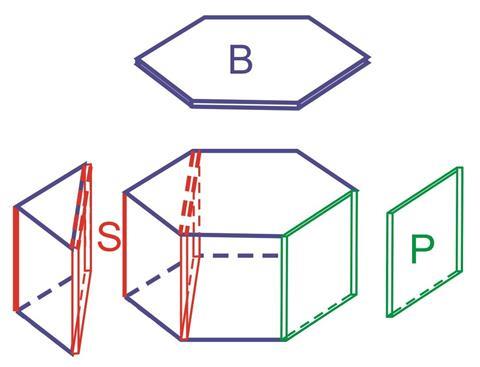 Illustration of the major faces of a hexagonal prism where B is the basal face, P the primary face and S is the secondary face

The team grew large single ice crystals, which are shaped like hexagonal prisms, in a way that exposes the three different faces: the basal face (the two hexagonal faces), the primary prism face (the six rectangular faces) and the secondary prism (the six inner rectangular faces). Having examined each face with crystallographic and macroscopic techniques, they found that ice crystal growth in liquid water differs profoundly from crystal growth in water vapour – the reason that experimental measurements and theoretical models have been in disagreement over how snowflakes’ shape correlates with the arrangement of water molecules within the crystal.

In water, ice growth is thermodynamically controlled. When ice crystals grow surrounded by water vapour, however, kinetic factors take over. In this case, the six primary prism faces become more stable than the other faces, leading to six-sided snowflakes.