A matter of supramolecular priority

Most chemists can list the articles that have shaped their lives. For many of us, one of the most relevant are the Cahn–Ingold–Prelog (CIP) priority rules of 1966.[1] The paper has an impressive citation count, but just as important is the stability of its popularity: its practical utility has ensured that it continues to be used by generations of chemists across the world.

The CIP rules give us a simple tool to unambiguously describe stereocentres, and as such it is a vital part of our rigorous nomenclature for molecules. Yet, the rules are lagging behind some developments in chemistry, and in particular when it comes to supramolecular species.

The covalent chemical bond is often considered to be the basis of CIP rules, but the noncovalent interactions that are so vital to supramolecular chemistry also give rise to stereogenic centres. Clearly the rules can be improved, but we should also be careful not to needlessly complicate something that works remarkably well.

The existing rules do include lone pairs – in 2004 the International Union of Pure and Applied Chemistry (Iupac) integrated them with regard to the treatment of tetrahedral systems having a pair of electrons:[2] ‘a lone pair of electrons on an atom such as nitrogen or sulfur has the fictitious atomic number of zero. It is thus ranked lower than a hydrogen atom’. We therefore propose a further, simple extension of the priority rules to solve the problem of noncovalent interactions.[3][4] 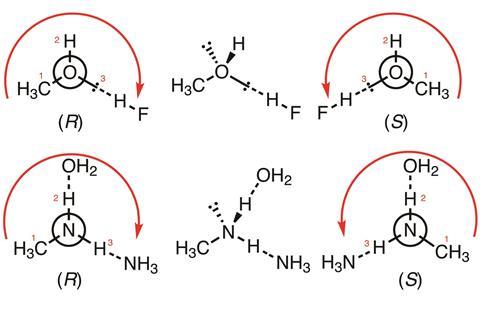 For interactions involving atoms (for instance H atoms as part of hydrogen bonds), the assignment is achieved by the same rules as those applied to stereogenic centres; thus, hydrogen bonding or another noncovalent interaction is higher priority than hydrogen, and noncovalent bonds are prioritised by atomic number of the ligand (highest to lowest).

To correctly name a compound is to become aware that a stereogenic centre has been created and to ask oneself about the origin of the chirality; moreover, the presence of a second, supramolecular stereogenic centre, results in hidden diastereomerism. This simple system allows us to describe supramolecular structures clearly and further improve the language of chemistry.