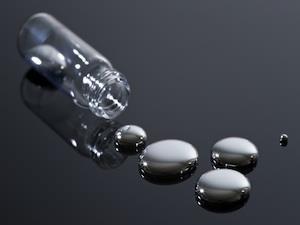 The import or export of mercury is set to be banned

After six days of complex discussions in Geneva last week, governments from around the world agreed to a global, legally-binding treaty on Saturday to limit mercury use. This is the first new major environmental treaty in over a decade.

The Minamata Convention on Mercury – named after the Japanese city where thousands of residents fell ill with mercury poisoning in the 1950s – covers a range of products and processes where mercury is used or released. Countries will be invited to ratify the treaty, which took four years to negotiate, at a meeting in Japan in October, but it is not expected to come into force for another three to five years.

The treaty bans production, export and import of a range of mercury-containing products by 2020. These include batteries, except for those used in implantable medical devices; switches and relays; certain fluorescent lamps; soaps and cosmetics; and some medical devices such as thermometers and blood pressure devices. Exceptions include vaccines where mercury is used as a preservative. There will be a ‘phase-down’ of the use of dental fillings using mercury amalgam.

Furthermore, the treaty requires countries to draw up strategies to reduce the mercury used in artisanal and small-scale gold mining operations (ASGM) within three years of the treaty entering into force. Mercury is used to separate gold from ore-bearing rocks. ASGM is one of the chief sources of mercury emissions (35%), according to UNEP’s Global Mercury Assessment 2013, which was presented to the meeting; the other is coal-fired power stations (24%).

The treaty will almost certainly result in avoided mercury emissions in the future, which is a step forward

The treaty also covers mercury emissions and releases from large industrial facilities ranging from coal-fired power stations and industrial boilers to certain kinds of smelters. Nations agreed to install best available technologies (BAT) on new facilities and to draw up plans to cut emissions from existing ones. They deferred setting thresholds on facility size or level of emissions to be controlled until after the treaty comes into force.

The US has recently finalised a Mercury and Air Toxics Standard which is predicted to reduce mercury emissions by 20 tonnes by 2016, and an export ban came into effect this January. The EU banned mercury exports in 2011.

Global emissions of mercury have remained relatively stable in the last twenty years, with 2010 emissions from human activities thought to be just under 2000 tonnes. However, UNEP says there is still uncertainty in its estimates. Due to rapid industrialisation, Asia is the largest regional emitter of mercury, accounting for just under half of all pollution.

UNEP estimates that 260 tonnes of mercury – previously held in soils – are being released into rivers and lakes. Most human exposure to mercury is through the consumption of contaminated fish, making aquatic environments the critical link to human health. In the past 100 years, the amount of mercury in the top 100m of the world’s oceans has doubled, leading to concerns about the accumulation of the metal in fish. Concentrations of mercury in deeper waters have increased by up to 25%.

However, some campaigning groups claimed that the new treaty is unlikely to reduce mercury releases. ‘If implemented, the new treaty might slow the rate of increasing mercury levels but greater political commitment will be needed to actually reduce mercury pollution,’ says Joe DiGangi of IPEN, a network of organisations working to eliminate persistent organic pollutants.

IPEN is disappointed that the treaty designates ASGM an ‘allowed use’; action is required only if nations determine that ASGM is ‘more than insignificant’, but there are no guidelines to determine significance. ‘No phase out date, no limit to mercury imports, no clean-up of the mess it leaves behind,’ remarks Yuyun Ismawati of Bali Fokus, an Indonesian environmental group. ‘These weak measures guarantee a new generation of suffering among those who work in this industry.’

The section on coal-fired power plants also comes in for criticism. Though the treaty creates an ‘obligation’ to reduce emissions at existing plants, those reductions are only required ‘where feasible’, IPEN points out. Another gripe is that there is also no obligation for industry to reduce releases of mercury to water, such as from mercury cell chloralkali plants, or to land from large-scale mining. Instead the treaty notes that countries should try to act ‘where feasible’.

Other observers were less critical. Noelle Selin of the Massachusetts Institute of Technology says: ‘While many hoped that the requirements under the treaty might have been stronger, considering the difficulty of negotiating a global agreement that covers both developed and developing countries, it’s not unexpected that requirements reference “feasibility”, and include measures that aren’t as stringent as those in the US and Europe.’ She expects that many of the specifics will be determined as the treaty is implemented, for example the technologies that will be applied to mercury air emissions.

‘The treaty will almost certainly result in avoided mercury emissions in the future, which is a step forward,’ she adds. ‘Since mercury lasts for a long time in the environment, all avoided emissions have long-term benefits.’

‘I think the treaty should be seen as a success,’ says John Munthe of the Swedish Environmental Research Institute. ‘[It] is a starting point for continued international cooperation to reduce mercury use and emissions and not an endpoint.’ He welcomes the ban on mercury products and continued work on implementing BATs for point sources, even if actual emission reductions will not occur immediately. The ASGM is a very complex issue, he adds, and a ban could not have solved the problem.