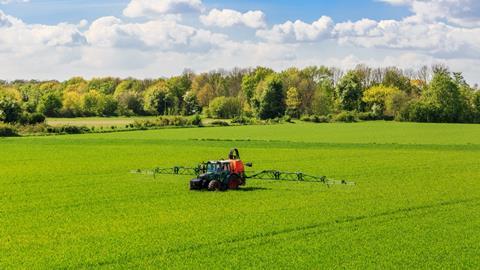 Human exposure to the controversial herbicide glyphosate, the key ingredient in Monsanto’s Roundup, has increased significantly in one Californian community since 1994, according to new analysis by a University of California San Diego (UCSD) team. The researchers link this rise to the introduction of genetically modified glyphosate-tolerant crops to the US that year. Agricultural application of Roundup to glyphosate-tolerant crops in the US such as soy and corn has jumped approximately 15-fold over this same time period.

The UCSD researchers compared the levels of glyphosate and its metabolite aminomethylphosphonic acid (AMPA) in the urine of 100 people living in a southern California community who provided samples regularly between 1993 to 1996 and 2014 to 2016. They believe the increase in glyphosate levels corresponds to the rise of genetically engineered foods.

‘What we saw was that prior to the introduction of genetically modified foods, very few people had detectable levels of glyphosate,’ says Paul Mills, who led the research team and directs the UCSD School of Medicine’s Center of Excellence for Research and Training in Integrative Health. As of 2016, Mills says, 70% of the study cohort had detectable levels of glyphosate, and their mean urinary level of the chemical increased from 0.203μg/l in 1993–1996 to 0.449μg/l in 2014–2016. Mean levels of AMPA rose from 0.168μg/l in the 1990s to 0.401μg/l in the 2010s.

The UCSD findings are based on data from a prospective population-based study of older adults living in south California, which was launched in 1972. Decades later, about 1000 of those research participants are still being followed. For their study, Mills’ team randomly selected 100 people from this cohort, and tested samples for glyphosate.

Mills hopes that this work will inspire others who have access to comparable large study groups in the US, Europe and elsewhere to carry out similar analyses to get a sense of how glyphosate exposure has changed over time. In addition, he says, the UCSD team would very much welcome samples from other big longitudinal clinical trials. Although human research into the effects of glyphosate has been scarce, animal studies have linked chronic exposure to glyphosate-based herbicides to negative health effects, including cancers and liver toxicity

Alan Boobis, a toxicology professor at Imperial College London, says he is not surprised by the findings, given the use of glyphosate in the US over time. ‘Use was relatively modest until around 1998 and then increased steadily and considerably since then,’ he tells Chemistry World. However, Boobis says he would need to see the concentrations converted into exposures in milligrams per kilogram of body weight to enable comparison with the acceptable daily intake (ADI), which is a level considered without harm when exposure occurs daily over a lifetime. Although the UCSD team found that exposure to glyphosate has increased, Boobis emphasises that it still well below the ADI.

Günter Neumann with the Institute of Crop Science at Hohenheim University in Germany agrees that it’s a ‘quite simple relationship’ that increased use of agrochemicals is associated with increased residual levels in the environment, and he points out that this is not restricted to glyphosate. He notes that similar relationships have been observed for nitrate and atrazine.

Debate rages on about glyphosate and its potential health impacts but most regulatory bodies agree that it is not carcinogenic at levels routinely encountered. The European Chemicals Agency concluded in March that the herbicide should not be classified as cancer-causing, and the US Environmental Protection Agency came to a similar conclusion in September 2016. Other bodies that have concluded glyphosate is unlikely to be carcinogenic at the levels currently applied in agriculture include the European Food Safety Authority and the Canadian Pest Management Regulatory Agency.

However, a 2015 report by the International Agency for Research on Cancer (IARC) – the World Health Organization’s research arm – concluded that glyphosate is probably carcinogenic to humans. Both sides of the debate accuse the other of collusion and scientific fraud.

Meanwhile, the European parliament voted on 24 October to phase glyphosate out by the end of 2022. The next day an EU vote on whether to approve glyphosate for another 10 years, as the European commission had proposed, was delayed for a second time due to insufficient support. A shorter reauthorisation period is expected to be approved for the herbicide in Europe. Quick action is needed since glyphosate’s licence in Europe expires on 15 December 2017.