Researchers in South Korea have combined an electric sensor with a machine-learning algorithm to create a device that can feel and distinguish different surface textures. The device could find use in virtual reality, robotics and medical prosthetics. 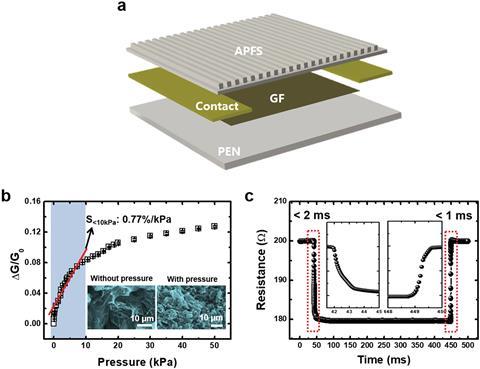 (a) Schematic of the force sensor. (b) Its piezo-resistive characteristics. (c) The sensor’s response time is estimated to be as fast as 2ms for deformation and 1ms for restoration.

Machines can already recognise and replicate patterns associated with human speech and vision. Touch, however, is more complex to mimic because it relies on mechanoreceptors in our skin that sense tiny changes in pressure and vibrations when we touch different surfaces.

Now Wanjun Park and his colleagues at Hanyang University in South Korea have taken a significant step towards human-like touch sensing with a sensor made of a graphene-flake film supported on a robust polyethylene naphthalate substrate.

The device detects changes in electrical conductance and resistance through the graphene film when the film is deformed. Strain increases the physical contact between individual flakes in the film, which increases conductance through the device. The graphene film responds to deformations in just 1–2ms, which Park says is much faster than any other piezo-resistive material. Graphene’s natural elasticity is responsible for such speed and is comparable to human touch signals travelling to the brain.

Park explains that most tactile sensors out there detect a touching event by measuring the strength of a structural deformation. He says this means they ‘can’t be true tactile sensors in principal because such sensors don’t distinguish the surface texture.’ In contrast, Park and his team incorporate their graphene film onto an artificial fingerprint structure so the film reacts to tiny vibrations caused by the ridges on the fingerprint rubbing against a textured surface. Analysing these vibration signals allows the sensor to “feel” differently textured fabrics. 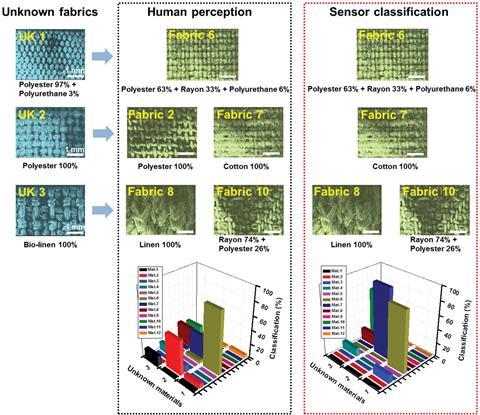 Darren Lipomi from University of California San Diego in the US, who also works on tactile sensing, says ‘there are few examples of electronic skin that can achieve human-like sensitivity to surface textures.’ He applauds how the team from South Korea also incorporate a machine-learning algorithm so that their sensor can ‘classify textures the same way that we do – automatically – in our brains.’

The machine-learning algorithm collects the conductance and resistance information from the sensor and uses it to define specific features associated with different surface texture types. After learning the features of known fabrics, the sensor was able to extrapolate this knowledge and significantly outperform humans when classifying 12 new fabrics – scoring 99% compared to 58% in a blind test of 50 people. The team deliberately chose fabrics to highlight the sensitivity of the sensor – textile surfaces can be very delicate and humans are not always able to tell them apart.