Surgical sensor tracks healing and then simply fades away

The sensor could help people recovering from surgery to exercise, but ensure that their recovery is going according to plan and that they’re not overdoing it

A sensor that tracks strain and pressure on tendons as they heal could help doctors closely follow a patient’s recovery. The dual sensor continued to work for up to two weeks in a rodent and then gradually broke down without causing inflammation.

The ability to monitor the mechanical forces on tendons after surgical repair would improve rehabilitation and allow treatments to be tailored to each patient. As the sensor dissolves after use it also means that no additional surgery is needed to remove the device. ‘We could constantly measure the strain that tendons are subjected to and that would allow patients to have a higher standard of life by being more active, but not taking on too much strain,’ explains co-author Bob Schroeder at the University College London, UK. He says the ultimate application would be to ‘monitor strain and pressure on the heart after heart surgery’. 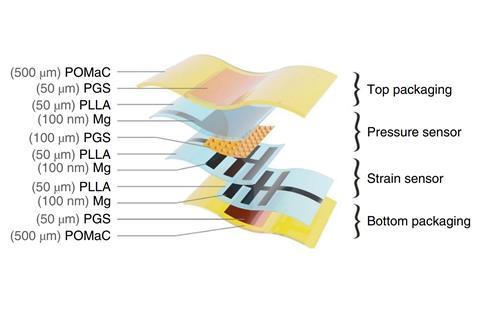 The layered 1.5mm device consists of three biodegradable polymers and magnesium electrodes. It is so sensitive it can detect the pressure exerted by a grain of salt.

A biodegradable elastomer was used as the strain sensor because it could incorporate pyramid nanostructures to enhance sensitivity. Once strain is applied, two thin comb-shaped electrodes slide past each other, resulting in a change in capacitance that is measured as strain.

The electrodes were made by depositing magnesium onto a biodegradable polylactic acid polymer. Once pressure is applied, the variation in distance between a top and bottom electrodes can be read as a change in capacitance and pressure. Both sensors are packaged together in a 500μm layer of biodegradable elastomer.

‘The challenge was to find the right material for the right part of the sensor,’ says Schroeder. ‘That it maintained the right properties to continue operating for over a week in a rat was remarkable.’ Even through 20,000 capacitance cycles, there was no change in the signal shape or intensity.

The disintegration of the device over time was achieved by adjusting the crosslink density of the material, using reversible ester crosslinks, and irreversible, UV initiated vinyl-crosslinks in the packaging elastomer.

‘This is a great example of an emerging and exciting research direction that could change healthcare by providing a new class of device for monitoring and in some cases providing therapies for wound healing,’ says John Rogers at Northwestern University, US. ‘The way they put the materials together is pretty unique in that it yields a single integrated platform that has dual capabilities in measuring mechanical strain and pressure.’ He adds that ‘some sort of wireless data capability’ will be crucial to deploy it in a realistic way. This capability might require a power source, which could come from a thermoelectric device that uses temperature variation to collect energy, something Schroeder is working on.