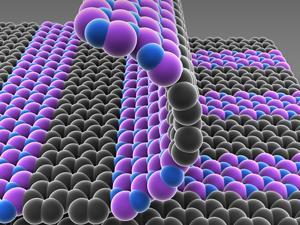 The race to create ultrathin, transparent and flexible electronic devices using graphene – the most conductive material known to exist – has a promising new contender. Researchers in the US have developed a process that stitches atom-thick sheets of insulating boron nitride to graphene and this could prove to be a versatile and scalable method for creating atomically thin integrated circuits.

Graphene is a single layer of carbon atoms arranged in a hexagonal lattice and touted as a replacement for silicon in electronic devices. However, graphene lacks a band gap – meaning that it cannot stop conducting electricity. This poses a problem for controlling the flow of electrons through the material, which is a requirement for any electronic device. Several research groups are working on ways to make hybrid graphene materials suitable for devices, but the race is still on.

Now, researchers at Cornell University in the US have developed a process called ‘patterned re-growth’ that stitches together graphene with atom-thick sheets of boron nitride – also arranged in a hexagonal lattice – to produce a two dimensional hybrid material with complementary properties.

The technique involves growing graphene on a copper substrate and then etching a pattern using standard photolithography. Boron nitride is then grown selectively on the patterned region by chemical vapour deposition, made possible because the bare copper substrate catalyses the growth of BN.

'The two different regions can be laterally stitched together very well, forming mechanically stable atomic films,' says Cheol-Joo Kim, a co-author of the study. 'This means they are not just locally close to each other but they also form a heterojunction, opening possibilities to utilise interesting properties of the junction.'

Heterojunctions are the interfaces between two materials that have different electronic properties and are the building blocks of most semiconducting electronic devices including transistors, solar cells and integrated circuits.

Kim suggests that repeating the process multiple times could make it possible to create more complicated three-dimensional structures. 'We are excited that the structural and electrical properties of films were not degraded by the re-growth process after patterning for making heterojunctions, implying it can be employed for more complicated and necessary structures.'

'Nobody knows yet which horse will win the race as there are a few proposals for graphene-based electronic devices,' says Antonio Castro Neto, a graphene expert at the National University of Singapore. 'This is a very promising one. It proves what we have been saying for quite sometime, namely that graphene alone will have limited impact in electronics but when it is combined with other two-dimensional crystals, such as BN, the possibilities are only limited by our own imagination.'