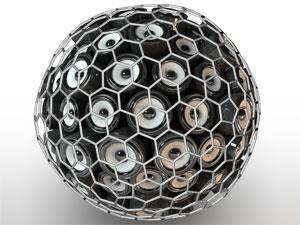 Researchers in the US have made thermoacoustic speakers using graphene – the atom-thick wonder material. The work shows promise for making lightweight, transparent and flexible loudspeakers with no mechanical parts that could possibly replace conventional loudspeakers. These speakers might also find use in a range of applications from consumer products and medical ultrasound to noise cancelling devices.

Unlike conventional speakers that require mechanical moving parts to compress air and generate sound waves, thermoacoustic speakers work by rapid heating and cooling of a conductor that causes expansions and contractions of the air which, in turn, generates sound. Although the concept of the thermoacoustic speaker was first proposed around a hundred years ago, progress has been hindered by a lack of suitable materials and fabrication methods.

Recent studies have shown that graphene might be a suitable material, particularly owing to its high thermal conductivity, very low heat capacity and its ability to form free-standing membranes. Now, Rodney Ruoff, Neal Hall and colleagues at the University of Texas at Austin, have shown that single and multiple layers of graphene can generate thermoacoustic sound on a range of substrates.

'While carbon nanotube films have been used as thermoacoustic microphones and there was one previous report of use of graphene in this way, we feel we have contributed a deeper understanding of those factors that would lead to near-optimal performance of a graphene-based thermoacoustic speaker,' says Ruoff. 'For example, we studied the effect of the supporting substrates on the thermoacoustic performance since the performance can be highly influenced by how the heat generated by graphene can transfer to the surrounding air, not to the supporting substrate.'

The team grew monolayer graphene on copper foils by chemical vapour deposition, which were then transferred onto transparent substrates using a wet transfer technique. They also patterned substrates with different surface porosities to determine how porosity would affect sound generation.

To test the acoustic properties, electrical wires were connected to the transferred graphene with silver paste. A microphone was then placed in front of the sample and, when a voltage was applied to the loudspeaker, the frequency response was measured by an audio analyser. The team made speakers the size of a fingernail that cranked out around 50dB - a similar noise level to the hubbub of a busy office.

'We showed that the graphene-based system can work on flexible substrates and that changing the overall shape of a flexible substrate with the thermoacoustic graphene speaker can focus sound in interesting ways,' says Ruoff.  'This may bring about interesting applications in medical ultrasound, where acoustic emitters with complex geometries can be realised to focus sound waves.'

'The million dollar question is whether this is really going to be used in an industrial application or if it will be an academic exercise,' says Antonio Castro Neto, at the National University of Singapore.  'The biggest challenges continue to be the mass production and transfer technology of large area graphene at low cost. As long as these two fundamental problems are not resolved it will be another curiosity generated by this amazing material.'