Amid this summer’s uncertainty over Greece’s position in Europe, it became clear to Greeks that locating basic medicines was becoming increasingly tough. Pharmacists complained about unpredictable deliveries from wholesalers, while wholesalers accused big pharmaceutical companies of choking off drug supply.

To make matters worse, some wholesalers began demanding cash, something pharmacies had trouble with, as the capital restrictions imposed on Greek banks began to grind away at a proper functioning market economy. The government itself stands accused of non-payment of rebates to pharmacies, while hospitals and the state-backed health insurer reputedly fell further behind on payment obligations. 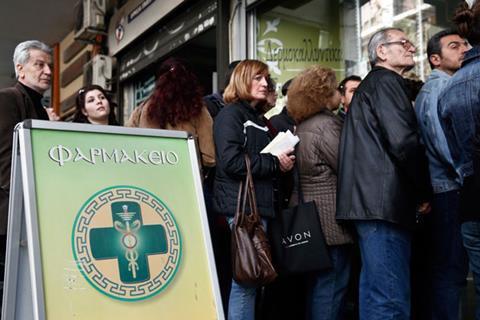 ‘Everyone is blaming everyone else,’ observes market analyst Brendan Melck at IHS. ‘Pharmacists and wholesalers suggest producers are restricting supplies to Greece, but producers say it is all down to parallel exports.’

The Greek medical supply chain is extremely fragmented, with several hundred wholesalers involved in distribution, and half of all drugs imported. Pharmaceutical companies set down their concerns in an open letter to the European commissioner for health in June. If Greece reverted to the Drachma, the price it pays for medicines would fall precipitously and the European Federation of Pharmaceutical Industries and Associations (EFPIA) wanted reassurance that this would not have a knock-on effect on pricing around Europe, since many countries set prices based on international references.

The second concern was over parallel trade. If drug prices dropped in Greece, this would make it more profitable to re-export drugs out of the country. As well as eroding firms’ revenues, this could exacerbate shortages within Greece, and potentially pose a threat to public health. ‘Firms sell to a country for patients within that country, not so someone else can make a profit by re-selling [products] outside the country, although European law permits this to happen,’ says EFPIA spokesman Faraz Kermani.

Wholesalers accuse big pharma of restricting supplies, presumably to put a squeeze on parallel trade. The European Association of Euro-Pharmaceutical Companies, which represents the licensed parallel distribution industry, struck back with its own letter to the European commissioner in early July, accusing ‘the wealthy pharmaceutical industry’ of ‘exploiting the potential advent of another crisis in Greece for [its] own commercial purposes.’

Greek authorities imposed an export ban on 25 types of drug in mid-July; the health ministry said there had been a significant increase in some imported medicines being shipped back out of the country, with abuses by some distributors. But companies are also worried about the current arrangement of continuing to supply medicines despite unpaid bills, reported to exceed €1 billion (£710 million). ‘Some members may put in restrictions. This isn’t a bottomless pit,’ warns Kermani. ‘What we are doing now shows our commitment to patients.’

As pharmacies complained about being unable to obtain drugs from wholesalers, during the height of the standoff, Pfizer said it was unaware of any problems and was continuing to supply drugs.

Spending in the Greek health system before the crash was high and the system itself was deemed inefficient, bureaucratic and corrupt. Generic drug use in Greece was low, at around 20%. The ‘troika’ of financial institutions handling Greece’s bailout conditions (the European commission, International Monetary Fund and European Central Bank) set out to increase this to around 60% to save money. In the austerity drive that trundled on for five years, generic prices fell by 60%, says the Panhellenic Union of Pharmaceutical Industries (PEF). It complains bitterly that the previous memorandum of understanding with the troika introduced unilateral reductions to already low prices, especially generics, which suffered ‘far larger reductions in their prices, compared to more expensive drugs.’

The problem, say indigenous manufacturers, is not the price of generics, but the volume and money spent on more expensive pharmaceuticals from the big multinationals. ‘The market share of generics, mainly Greek manufactured products, has remained constant at 20%, which benefits the more expensive imported pharmaceuticals’ says Faye Kosmopoulou at the PEF, and the approach to price cuts has ‘served the interests of multinationals’.

Certainly, price cuts have impacted less on multinationals, as Greece is a small market for them, says Melck. ‘Smaller generic producers have been less able to withstand the big cuts.’ The problems in Greece ran deep. Newer countries to the EU (in eastern Europe, for exampe) are far more effective at controlling health spending, says Melck. ‘In Greece you had a situation where spending just continued to go out of control and they used quite blunt instruments to try to stop it, like across-the-board pricing controls.’

Health spending in Greece has dropped each year since 2009, driven by a sharp reduction in overall public spending aimed at reducing the large budget deficit, an OECD report in July noted.

Overall government spending fell more than €5 billion between 2009 and 2013 – a real-terms reduction of almost a third, according to the OECD. A whole series of changes to entitlement, benefits and user charges as well as structural reforms have left all sectors of the Greek health system affected.

As government spending fell, the burden on households has increased as a result of increased user charges for inpatient, outpatient and pharmaceutical services. Out-of-pocket spending in 2013 increased from 28% of overall health spending in 2009 to 31% in 2013. This is higher than other southern European countries such as Italy (22%) and Portugal (28%) and well above western European countries such as France (7%) and Germany (14%), the OCED notes.

The government annual bill for pharmaceuticals alone was cut by €1.8 billion between 2009 and 2013, notably by cutting the prices paid and promoting the use of generics.

The push by the troika for a new system was wildly ambitious and unrealistic, according to Apostolos Veizis, a medical doctor and director of the medical operational support unit in Athens for Médicins Sans Frontières, who says the cost of state mismanagement for decades is now being repaid by ordinary people, who are deprived of basic healthcare.

Veizis says the government tried to push doctors into prescribing more generics, but did so in a cack-handed way. People, he says, were told to use specific generic medicines, because they were cheap, but these were sometimes not even available in Greece.

The troika wants Greeks to pay more towards medicines and hospital visits, but Veizis complains that this will reinforce problems of accessibility of drugs. Already he has seen patients forgo drugs for chronic medical conditions, like high blood pressure, owing to economic hardship. He sees a broken system, creaking under an over-ambitious rapid reform agenda.

‘People cannot afford private medical care, so are going to the public healthcare system, at a time when the public service budget was cut by about 50%,’ he says. ‘Hospitals are not getting the money they need from the government, so cannot pay those supplying medicines. It sounds bizarre, but sometimes you find that supplies of syringes [in hospitals] have run out.’

In mid-August, Greece reached an agreement with its creditors. Harsh authority measures – imposed by the troika – are predicted to create more economic and social problems in Greece, with unknown consequences for the healthcare system.