Chance discovery to let scientists use peptides to tune the properties of emulsions for foods, cosmetics and even drug delivery 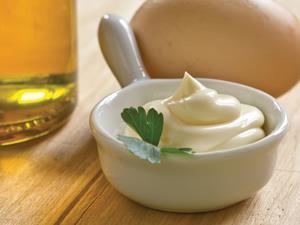 Peptide emulsifiers could be used to make highly stable emulsions, so that foods like mayonnaise last longer

All it takes to make new stable emulsions with tuneable and novel properties is to give a simple mixture of water, solvent and peptide derivatives a quick shake by hand. The chance discovery, made by researchers at the University of Strathclyde in the UK, could bring new possibilities to emulsion-based foods, cosmetics, catalysts and drug delivery.

Many consumer products are emulsions, including mayonnaise, ice cream, peanut butter and cosmetics, and the properties of the emulsifier influences their structure and shelf life. Conventional emulsions typically contain a single layer of amphiphilic molecules, but the new emulsions form nanoscale networks of peptides that incorporate hydrogen bonds. This makes them more stable than monolayers and altering the amino acid sequence of the peptides allows the emulsions to be tuned to suit different and possibly new applications.

’There have been previous reports on the use of proteins and much larger peptides to stabilise emulsions,’ says Rein Ulijn, who led the study and is now at City University of New York, US. ‘There have also been reports on gelation of peptidic gelators in water and organic solvents.’ But until now, no one had tested whether peptide gelators could play a role in stabilising emulsions. ‘It worked much better than we could have expected and we are now excited to further explore this class of emulsions.’

The chance discovery came about when Ulijn’s postdoc researcher Shuo Bai decided to investigate gelation in organic solvents. After he found that peptide derivatives could form organogels the next question was what would happen in biphasic systems. He added an immiscible organic solvent, in this case chloroform, to a hot buffer solution containing dissolved peptide gelators. After shaking the mixture by hand for only five seconds an emulsion formed.

‘These emulsions remain stable for months, clearly demonstrating that nanostructured peptide layers provide an excellent barrier to prevent coalescence,’ says Ulijn. What’s more, the system could let scientists introduce bioactive or catalytic peptide sequences. ‘This opens up new possibilities not seen in currently used emulsifiers. We can see opportunities in controlled release of active ingredients, including fragrances or drugs,’ says Ulijn. This work has formed part of the basis for the spin out Biogelx, which is developing tuneable scaffolds to grow cells in.

‘Most interestingly, the method makes use of small peptides, which offer an enormous structural variation, and the possibility to introduce all kind of chemical and biological functionalities, while being fully based on biological substances,’ comments Jan van Esch, who investigates soft matter at Delft University of Technology, the Netherlands. ‘Such emulsions can, for instance, be tuned to interact specifically with cells or even tissues and other biological systems.’

However, Ulijn acknowledges that the peptide derivatives used so far contain synthetic aromatic ligands that may prevent their use in certain applications in biomedicine and food. ‘We are looking at ways to modify the molecular structure of the building blocks to enhance their biocompatibility,’ he adds.