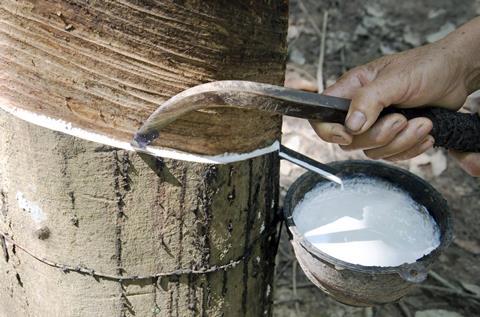 Natural rubber is hard to replace in many applications, but Europe’s supply depends on imports from Indonesia and Malaysia

The European commission has updated its list of 27 critical raw materials for European industry. Nine materials, including helium and natural rubber, have been added to the 2014 list, while chromium and magnesite have been removed.

Three of the newly added materials – bismuth, helium and phosphorus – were not previously assessed. Some have become more critical because of changing demand and supply, while others moved into the critical class because of a change in how their supply risk is calculated, focusing more on where Europe gets its materials rather than global production. One example is natural rubber, for which the commission notes there are few readily available substitutes, especially in the automotive sector. While Thailand is the world’s biggest supplier of natural rubber, Europe imports mostly from Indonesia and Malaysia, which score low in the World Governance Index, so are seen as less reliable.

‘The list first serves to understand raw materials security supply issues for the EU,’ says a commission spokesman. ‘We use the list to incentivise production in the EU through enhancing recycling or mining, and try to direct EU research funding in this direction.’

There is no European extraction of borates, niobium, platinum group metals, phosphorus, titanium or vanadium, and often EU imports rely on one or two countries. For example, China and Vietnam account for about 98% of antimony metal supplies. The rare earth elements come almost entirely from China.

The classification considers economic importance on the one hand and supply risk on the other. ‘The former will change over time – but very slowly. The latter has the potential to change more quickly between [commission] reports,’ notes Jack Bedder, metals analyst at Roskill, UK. For example, closing one vanadium mine in South Africa shut down around 10% of global vanadium supply. ‘This means that more vanadium supply is concentrated in China. That may well account for vanadium’s new critical label,’ adds Bedder. Russia and China now supply 85% of Europe’s vanadium.

There are also political threats to supply: China’s introduction of export quotas for rare earths in 2009 surprised European policymakers, but the World Trade Organization subsequently ruled that China’s export quotas, taxes and trading restrictions went against its rules. Rare earths are increasingly in demand for all sorts of high-tech goods, from phones to hybrid cars to wind turbines.

China is the major global supplier of 70% of the materials on the critical list, including all rare earths, magnesium, tungsten, antimony, gallium and germanium. In several cases, China is the largest global supplier of a material, but not the largest EU supplier. Examples include phosphorus, which the EU gets mostly from Kazakhstan; scandium (from Russia); fluorspar (from Mexico); and tungsten (from Russia).

Reducing the EU’s reliance on imports is not straightforward. ‘Mining requires an economic mineral deposit. Europe can’t just decide it wants to produce niobium,’ notes Bedder. However, he adds that nearly all niobium comes from Brazil and Canada, which have no history of supply disruption. ‘Generally speaking, there has never been a meaningful shortage of any of these critical materials.