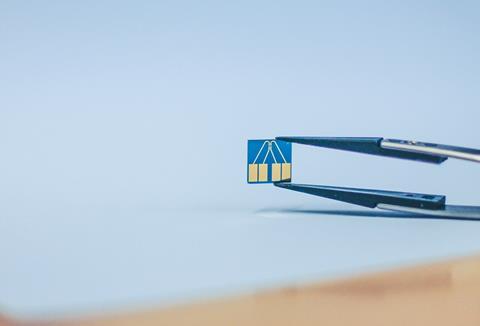 Detecting minute amounts of biomolecules is important in many applications, such as in medical diagnostics – where the presence of a certain protein indicates a disease – or in industrial monitoring – where contaminants can have severe consequences for the product. These cases require fast and sensitive methods of detection. Current methods offer either speed and ease of use, such as lateral flow tests; or high sensitivity, such as laboratory-based Elisa tests. This trade-off between speed and ease of use and sensitivity is not efficient enough in some use-cases, for example, when performing medical diagnostics in a remote location.

HexagonFab has combined these needs by developing a new generation of sensors that offer high sensitivity without compromising on speed. The sensors rely on a graphene-based nanomaterial that is the result of several years of intense research by co-founder Ruizhi Wang in Stephan Hofmann’s group at the University of Cambridge. 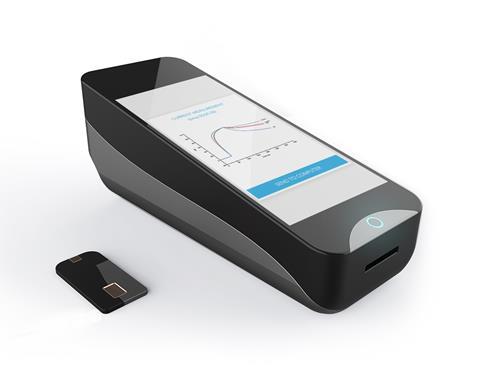 ‘The sensitive area of the sensor is a composite nanomaterial called a van der Waals heterostructure,’ Wang says. ‘You can think of this as a sandwich of atomically-thin layers of different materials. The reason for this structure is that, as for many composite materials, the total is more than just the sum of its components. The individual materials complement each other.’

Nanomaterials, such as graphene, were originally manufactured using a method called mechanical exfoliation, Wang explains. This is the process of taking a bulk crystal, such as graphite, and peeling off thin layers using adhesive tape. ‘Although this method sounds crude, it was used in the groundbreaking experiments that led to the Nobel prize for the discovery of graphene,’ Wang says. Headlines have hailed this class of material as the ultimate nanomaterial for over a decade. But, despite showing tremendous potential in research laboratories, it has only reached commercial use in a few applications.

The main commercial challenge has been the cost-effective, large-scale manufacturing of graphene-based technologies. It was possible to make small amounts – enough for research – but no method existed that was compatible with industry standards for production at a large scale.

‘Fabrication of the hexagonal nanomaterial stacks using industrially scalable methods proved to be extremely challenging,’ Wang says, because the fabricated material is extremely inhomogeneous. This problem was the focus of his PhD research and, later, what HexagonFab’s technology was developed to solve. Instead of peeling off layers with tape, the company takes a different approach. It uses chemical vapour deposition, which is a standard industrial process, to deposit graphene on a large scale. The company then developed the methods required to integrate the material into devices – another key step. Wang believes large-scale manufacturing of this nanomaterial is set to enable not only novel sensors, but to power an entire generation of new technologies.

The sensor is a platform technology that could feature in a variety of industries and applications, ranging from life sciences and industrial monitoring to medical diagnostics. Its benefits are extremely high sensitivity at the point of care, or directly on site. ‘Combined with its small size and very affordable components, it enables the next generation of sensing,’ says Christoph von Bieberstein, HexagonFab’s other co-founder, and commercial director.

It works on the principle of a field-effect transistor (FET). The composite nanomaterial used by the company is sensitive to the electric charge in its environment. If this charge changes, then the material’s electrical resistance changes. Rather than providing a yes or no result, the pocket-sized sensor produces quantitative results within 15 minutes. 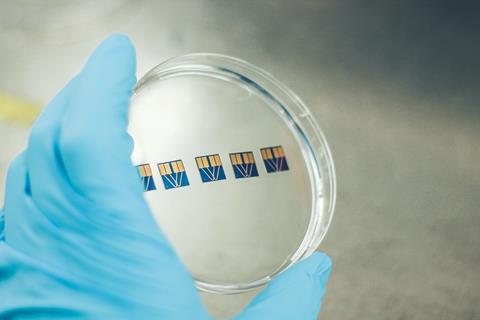 Depending on the biomarker being detected, the sensor works by attaching the corresponding capture molecule (for example, antibodies) to its surface. Users place a sample on the sensor and insert the unit into a handheld readout device to obtain results.

‘The technology has the potential to become a true game changer in medical diagnostics and industrial monitoring,’ says Bieberstein. The delivered sensitivity, combined with the device’s small size and low cost, could enable extremely affordable point of care testing and on-site monitoring, even in the most remote locations. ‘We believe HexagonFab could become the lab test that does not need a physical lab – inside your watch to analyse perspiration, in your bathroom for regular check-ups, at the pharmacy to test for an infectious disease, or with you at the restaurant table to check for allergens in food,’ he adds.

Several sectors have expressed interest in the technology, such as life science companies looking to analyse biomolecular interactions, and a broad range of industrial companies, for example, food and beverage producers or companies involved in bioprocessing that are looking to use it to monitor manufacturing quality or detect contamination by metals, pathogens or allergens. 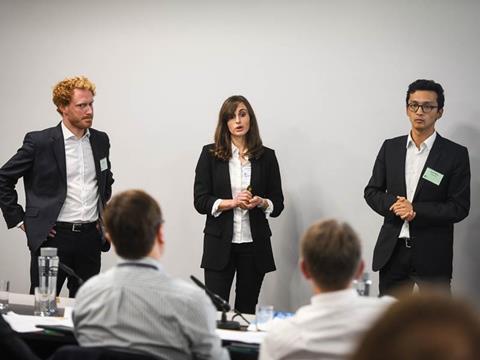 Last year, HexagonFab won Merck’s Displaying Futures Award and was one of the winners in the materials and enabling technologies category of the Royal Society of Chemistry’s Emerging Technologies competition. They also have grants from InnovateUK and the Royal Academy of Engineering. ‘These awards and grants have helped us tremendously in speeding up our development by bringing additional people and expertise to the team, and attracting industry interest,’ says Bieberstein.

Origin in a nutshell: spin-out from University of Cambridge

Funding to date: £250K in non-dilutive funding (awards and grants)