Within seconds of an injury to our skin, bacteria begin to colonise the wound. Most minor wounds still heal as the skin and tissues underneath repair themselves. But if a wound becomes infected, inflammation and tissue damage will slow the healing process and lead to severe problems if not treated rapidly. 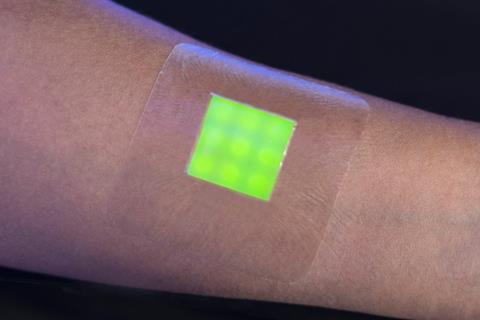 Toby Jenkins and colleagues at the University of Bath have developed a technology to help healthcare staff detect infection early; by harnessing bacterial toxins as a warning system.

As bacteria colonise the wound and start forming biofilms, they begin producing toxins. These break down tissue, freeing up cell components that the bacteria need to grow, as well as providing a way to penetrate further into the tissue. It is these toxins that cause a lot of the clinical symptoms of infection, such as tissue damage, pain, smell and heat.

‘Our idea was that the toxins are what signifies a wound becoming infected,’ says Jenkins. ‘And we can measure them at low concentrations, before they begin to cause tissue damage.’

When infecting bacteria release toxins, they rupture the vesicles embedded in the dressing, which releases a bright yellow dye

Jenkins and his team encapsulated fluorescent dye inside phospholipid vesicles designed to be attacked by bacterial toxins. The tiny spheres of lipid and fatty acids are about 100-200nm in diameter. Once in contact with a vesicle, the toxins either pierce holes in them or start to dissolve the lipid away. This releases the warning dye, turning whatever the vesicles are carried in a bright green colour.

The challenge, Jenkins says, was designing the vesicles to be stable for up to 18 months without falling apart, but also sensitive enough to rupture under a toxin attack. Working out the precise formulation of lipid and fatty acids took ‘two PhD students and lots of tedious empirical work’, he remembers.

So far, Jenkins’ team has developed three prototypes for infection detection systems. Smartwound, which was one of eight award winners at the Royal Society of Chemistry’s Emerging Technologies Competition in 2018, is a dressing containing vesicles dispersed in a hydrogel. When the wound becomes infected, the vesicles release carboxyfluorescein, a non-toxic dye that becomes fluorescent on dilution outside of the vesicle and turns the dressing green.

The second is Space, a swab sensor kit named after the microbes it can detect: staphylococcus aureus, pseudomonas aeruginosa, candida species, and enterococcus faecalis.

Wounds are swabbed as part of standard patient care in hospitals. Normally, a sample would take around 24 hours to be processed at the clinical microbiology lab. Space – a small container with an indicator solution containing the phospholipid vesicles – is much quicker, according to Jenkins: ‘Within half an hour to an hour you have a result whether [the wound is] infected or not. That’s a huge benefit – and you can do it next to the patient’s bedside, or in the GP surgery,’ he says.

A third application for the chemistry is detecting infections in urinary catheters. Rather than vesicles, the catheter system places gel capsules in the urinary drainage bag. The capsules are coated with a special polymer that dissolves above a certain pH and releases a dye.

Catheterised patients are very susceptible to infection, a ‘serious problem that isn’t talked about much,’ Jenkins says. Some bacteria secrete enzymes that convert urea to ammonia, increasing the pH of urine in the bladder. A pH above 7.5 can cause minerals to precipitate and block the catheter, which can lead to kidney failure, sepsis and even death. The gel capsules can give 12 hours warning of a potential blockage, according to Jenkins.

The team is about to test the Space sensor in Bristol hospital’s burns unit. ‘If the trial goes well, I’d like to think we’ll be on the home straight,’ Jenkins says. The next step would be to spin a company out from the university, and begin to take Space – as well as the chemistry’s other applications – to market. 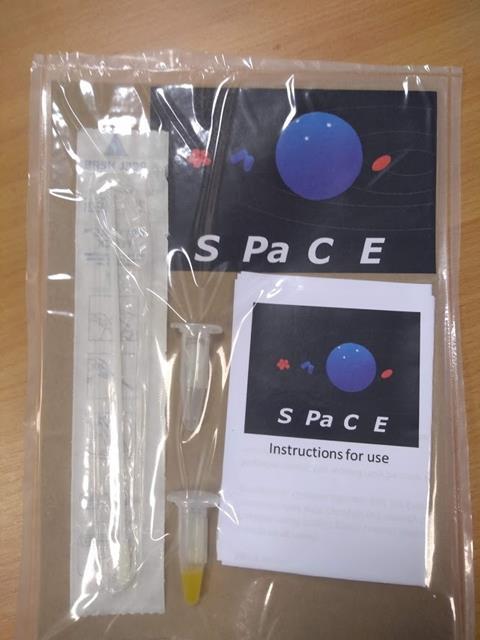 Jenkins also sees the technology being applied to chronic wounds and diabetic ulcers. ‘Ultimately, we want to combine it with a release system so that as well as diagnosing infection, we can start treating wounds,’ he says. ‘I’d like to aim towards creating a semi-autonomous surveillance treatment medical device or wound dressing.’

Meanwhile, Jenkins hopes to take the Space sensor into a social enterprise as well. Burns are a significant problem in Sub-Saharan Africa, so the team intends to set up some trials there. ‘We think our swab sensor system could be a perfect technology to use in missionary hospitals in faraway places because it’s very easy to use, stable for transport and very cheap,’ Jenkins says. He estimates each swab will cost under a pound. If the trials are successful the team would work with philanthropic organisations like the Bill and Melinda Gates foundation to distribute the swab sensors at either a low price or for free.