Heat exchangers are used in all sorts of places, from home refrigerators to the nearest process plant. Designed to efficiently transfer heat from one material to another, their performance can have a big influence on the overall energy efficiency, and hence environmental impact, of the application it is used in. 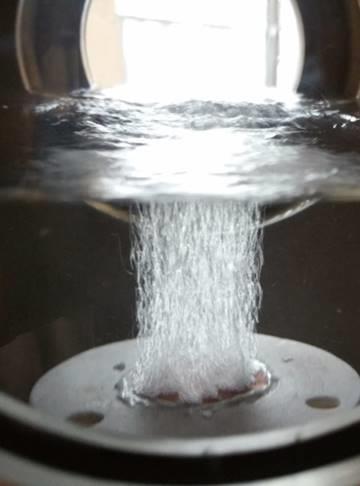 Bubbles nucleate on the tips of nano-sized spikes in the coating, which drastically accelerates boiling and heat transfer

A team of chemists and materials scientists in Oxfordshire have developed adaptable nanostructured coatings that can improve heat transfer in most applications. The idea for the technology was formed in 2011 by medical imaging entrepreneur Mark Evans, and Peter Dobson, former strategic advisor on nanotechnology to the UK research councils. They helped found Oxford nanoSystems, which is now about to bring the coatings to market.

Evans is now a director and Dobson acts as scientific advisor to the company. Alexander Reip, who was appointed Oxford nanoSystems’ chief executive officer in 2015, spent three years – formerly as chief technology officer – developing the company’s nanoFlux coating. ‘What makes our technology special is the actual structure that we are creating on the surface,’ he says. The coatings form spike-like, conical shapes, interspersed with pores. The fluid or gases inside the heat exchanger generate bubbles, which nucleate on the very tips of the cones. The pores catch the bubbles, grow them further and release them through the coating surface. ‘The surface is also highly oleophilic,’ Reip adds. ‘As soon as the bubbles leave, the refrigerants cover the surface again and create more bubbles.’ 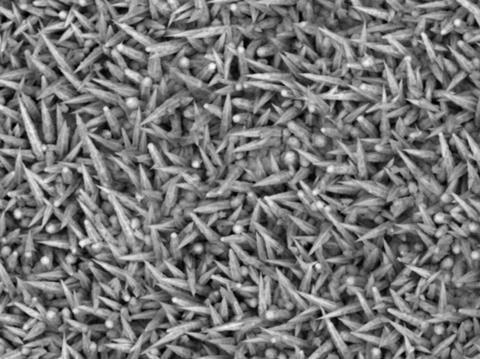 Oxford nanoSystems is tackling the refrigeration, industrial waste and heat recovery industry as its entry point into the market. The coatings are modifiable to any metallic heat transfer surface, and any geometry, meaning they can be applied to most kinds of heat exchanger, from complex textured plates, to tubes a few millimetres in diameter.

Because the coatings can be applied after manufacturing, they can be introduced to the supply chain without a processing overhaul. This makes them stand out from other available methods for improving heat transfer ­– such as depositing material on the surface by sintering, or adding texture using precision tooling techniques – that rely on drastically changing the manufacturing process.

‘Sintering adds very high temperatures to the process, and tooling adds a lot of cost,’ Reip says. More importantly, both need to be done before heat exchangers are manufactured. ‘We’re unique in that we’ve managed to create something that is scalable for heavy industry and that we can use in a large amount of different systems,’ he adds. 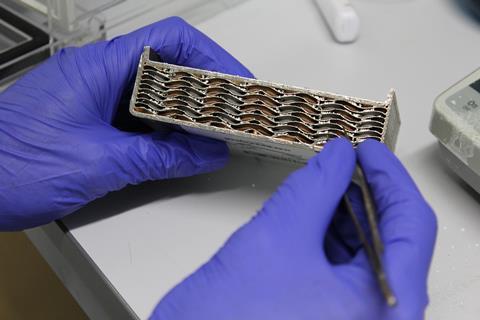 Tests at Brunel University, UK, have found the coatings increase a structure’s heat transfer coefficient by 524% compared to untreated surfaces. And the company’s evaporator nanoHex, which was one of eight award winners at the Royal Society of Chemistry’s (RSC) Emerging Technologies competition in 2018, uses 70% less refrigerant than a traditional unit. The technology could reduce our need for environmentally hazardous refrigerants such as hydrofluorocarbons.

Reip also sees the coatings being used to cool data centres, which consume more than 2% of the world’s electricity, and half of that is used just to keep them cool. ‘If we can improve on that, it would be a huge reduction in the world’s energy usage,’ says Reip. Batteries in electric vehicles also require efficient cooling to operate effectively.

2019 is going to be a big year for Reip and his team. They raised funding last year to start scaling up the business and consequently grew from three to 12 people. At the end of December the company moved to a new facility in Abingdon, which has its own wet and thermal labs for internal testing as well as plenty of manufacturing space.

The next step is taking the technology to industrial processing, Reip says. The team is about to commission a pilot plant, and begin producing coatings at a much larger scale. ‘It’s been a long time coming,’ he says.

Reip adds that the company developed the technology on a relatively low budget for the last six years, largely thanks to funding from Innovate UK, and help from the Science and Technology Facilities Council and RSC. Oxford nanoSystems won an RSC internship grant in 2015, and an industrial placement grant to host a student during 2017–18. ‘We had an extra pair of hands when we needed it. It worked so well that I kept the placement scheme going, and increased it this coming July to include two chemists and a chemical engineering placement as well,’ Reip says.

Origin in a nutshell: Independent start-up founded by academics and business professionals.