Higher levels of some metals in e-cigarette smoke 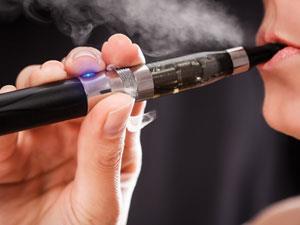 A study comparing secondhand emissions from e-cigarettes and conventional tobacco ones reveals that although e-cigarettes release much lower levels of most harmful compounds, they actually discharge more nickel and silver than tobacco cigarettes.

E-cigarettes are electronic devices that aerosolise nicotine-containing liquids, called e-liquids, for users to inhale. They have been widely marketed as safer alternatives to traditional cigarettes as they do not contain tobacco, and their use has rapidly risen over the last decade. However, little research exists on what effects e-cigarettes have on users or those in the vicinity. Various adverse health effects have been suggested and the proposed benefits of helping smokers to quit are unconfirmed, with available research also highlighting large inconsistencies between different brands.

This has left regulators behind and led to confusion for users. E-cigarette use is starting to be restricted in some public areas such as the London Underground, some airports and most schools, and the World Health Organisation has recently called for vaping to be banned in all indoor areas.

Keen to gain insight into the toxico-chemical properties of secondhand e-cigarette smoke, Ario Ruprecht at the Laboratory of Environmental Research in Milan, Italy, and colleagues measured aerosol emissions from e-cigarettes and traditional cigarettes under controlled conditions. A testing room was furnished with regular office furniture and three fans to ensure the air was well mixed. Three smokers volunteered for the experiment and each individually smoked a traditional cigarette and an e-cigarette for seven minutes in the room. The sampling equipment was placed on the opposite side of the room to the smoker to prevent smoke directly entering the equipment.

The team confirmed previous findings that e-cigarettes release lower amounts of harmful compounds, and an overall 10-fold decrease in total exposure to particulate matter was found compared with traditional cigarettes. Secondhand e-cigarette exposure therefore appears to be lower risk for the public but the team did find that emission levels of some toxic metals such as nickel and silver are higher from e-cigarettes.

Air quality expert Linsey Marr, of Viginia Tech, US, says although the work shows that e-cigarettes seem to produce much lower exposures to many of the worrisome compounds in secondhand smoke, she would be wary of sitting near someone using one indoors. ‘E-Cigarettes still release compounds that have adverse health effects, and some of the metals are of particular concern.’

According to this study, the source of the metals appears to be the e-cigarette cartridge rather than the e-liquid, highlighting the need for manufacturing processes to be closely regulated.

Ruprecht says the team hope this research will help to verify the health hazards for smokers and for persons exposed to secondhand aerosols from e-cigarettes in indoor environments. ‘The results could be valuable in setting policies for the use of e-cigarettes in public spaces,’ adds Marr.