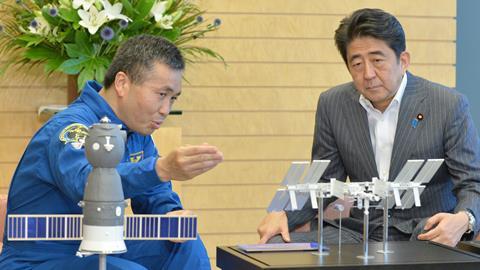 Shinzo Abe’s decision to step down as Japan’s prime minister for health reasons brings to an end the longest term of any holder of this post. When he came to power in 2012, Abe launched a set of aggressive economic policies dubbed Abenomics. His plan was to reinvigorate an economy that had suffered two decades of stagnant growth and make Japan one of the most innovative countries in the world. So how has science and technology fared during his premiership?

Abe’s government set a goal of spending 1% of GDP on science and technology by 2020, up from 0.65% in 2015. This involved boosting the budget by 300 billion yen (£2.1 billion) per year. Japan will hit this target following increases in 2018 of 7%, compared with 2017, and 10%, compared with 2018, in 2019, says Takahiro Ueyama, executive member of the Council for Science, Technology and Innovation, the government’s science advisory body.

‘The Abe administration set out to make Japan a most innovation-friendly country and made every effort to accomplish that goal,’ he says. ‘In particular, Abe was interested in reconstructing the environment of science and technology, putting forward reforms of the national university system, improving funding to academia, as well as increasing national investment.’

‘From the beginning, Abe placed science and technology at the centre of his economic growth strategy,’ explains Atushi Sunami, executive adviser to the president of the National Graduate Institute for Policy Studies. ‘Abenomics’ strong emphasis on innovation led to the reform of Japan’s national innovation systems, particularly university reform.’ All national universities became quasi-private organisations and government ‘block’ funding was cut, forcing them to look elsewhere for support and become more competitive.

While the government did increase its science budget significantly, this was focused on areas where the private sector would collaborate with academic partners, Sunami notes. ‘[Now] the academic community is probably divided in assessing Abenomics and its contribution to Japan’s science and technology. The scientists and engineers who are more close to business appreciate Abe’s approach more than those who are close to more fundamental research.’

Yuko Harayama, a former executive member of the Council for Science and Technology Policy and now executive director at Riken, agrees with Sunami that Abe’s legacy for science is mixed. On the plus side, science and technology’s status and importance grew within society. ‘In addition, his government encouraged dialogue between the private and public sectors, which was a new thing. Even those working in basic research started to consider working with industry.’

On the other hand, Harayama points out how access to funding is limited to mainly top-tier researchers. Young researchers find it harder to establish themselves. ‘We need to invest in big programmes but also in smaller ones that encourage more diverse and creative ideas, and Abe’s government was not well-equipped for this.’

Before Abe’s premiership was a difficult period for science, Harayama explains. ‘But Abe pushed the idea of using the power of scientific innovation to aid economic recovery. Science and technology became more important but unfortunately the budget didn’t follow. Funding remained stable for many years but didn’t increase [until 2018].’

But his government did set up two key programmes. The Impact programme ran from 2013–2018 and aimed to invest in new areas that could change society and the economy. Researchers could apply with new, challenging ideas which might not be funded in the traditional way.

The Strategic Innovation Promotion programme encourages industry to work with public sector researchers. It was geared to application-driven projects such as automonous cars. ‘Traditionally, Japanese companies invest a lot in research but don’t collaborate much,’ notes Harayama. ‘But after several years of no growth, they realised that some cooperation aided by public money would be good for business.’

‘Under Abe, some labs with senior scientists with established track records did well from these sources of funding,’ says Harayama. ‘But funding became concentrated in certain universities, mainly in the University of Tokyo. A large proportion of researchers say they have less chance of getting funding, and with opportunities declining, so are the numbers of science PhDs. The result is a lack of diversity of ideas.’

Meanwhile, during Abe’s term, Japanese academics have not fared well on the global stage. A survey by the Japan Science and Technology Agency in 2019 using Elsevier’s Scopus database assessed countries by their volume of high quality articles published in 151 fields between 2015–2017. It analysed the top 10% of articles with the highest average citations. Japan was ranked in the top five in 18 disciplines, compared with 83 20 years ago, according to Japanese newspaper The Mainichi. Even areas where Japan has been strong in the past, such as chemistry and materials science, have seen a gradual fall in citations.

‘Very unfortunately the position of Japanese academia in the world has been deteriorating even during the past eight years,’ says Sunami. ‘That trend actually began in 2004 [when universities were reformed]. Abe’s administration attempted to reverse [it] by improving the environment of academia and increased the funding. His reform achieved some positive results.’

Harayama thinks the problem may be because few researchers collaborate globally. ‘It is challenging to incentivise researchers to connect with their colleagues overseas, but attitudes are starting to change following some recent government measures. Our data shows that Japan receives more researchers than it sends outside the country. There is a lack of incentives for our students to study abroad. Covid-19 has introduced an additional barrier so we have to find new ways of cooperation and collaboration.’