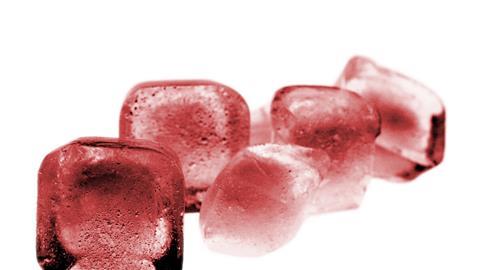 Trapping a reagent in an ice cube and letting it slowly melt in a solution of another reagent is the simplest way to make isolated transition metal atoms, researchers in China have discovered.

Certain reactions – like the one between silver nitrate and sodium chloride – produce insoluble solids that precipitate. Often, this process is undesirable as it creates large and irregular clumps of solids. Nanoparticles, for example, have different properties depending on their size, and when it comes to metal catalysts, smaller particles are often more efficient.

‘Usually, we have two bottles, one is solution A, the other solution B, and we mix the two solutions by stirring,’ says Hui Wu from Tsinghua University, who led the study together with Binghui Ge from the Chinese Academy of Sciences and Li-Min Liu from Beihang University. However, this creates high local concentrations of one reagent and can cause uncontrolled precipitation. A workaround is to add one solution to the other drop by drop. Still, each droplet contains huge numbers of molecules.

‘I did some brainstorming with my students in a group meeting to see if we could come up with new ways to do solution chemistry,’ says Wu. What they thought up is as simple as it is effective: freeze one of the solutions in water and drop the ice cube into the other solution, which is kept at just above 0°C. Reagent release from the ice cube is so slow that formation of nuclei – tiny particles that can aggregate and grow in uncontrolled manner – is suppressed, which allowed the team to make single metal atoms. 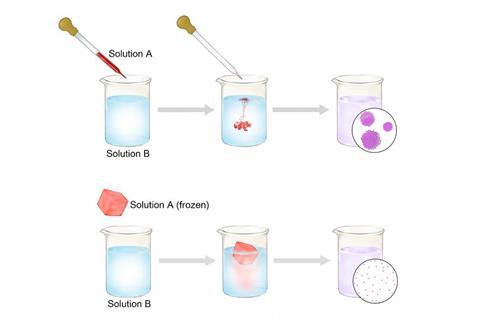 Metal salts frozen into ice cubes release so slowly that individual metal atoms can form in a reducing solution, in contrast to ordinary mixing

The team tried their method on eleven transition metals, including copper, silver, gold, platinum and ruthenium, by adding a metal salt ice cube to a reducing agent solution. As the ice cube releases fewer than five metal cations per nm2 per second, the metals can’t nucleate and precipitate. Instead, the cations get reduced one by one, and remain as isolated atoms stabilised by the surrounding water molecules. Wu, Ge, Liu and colleagues captured the metal atoms on carbon sheets and visualised them with scanning tunnelling microscopy.

‘I was very impressed with the amount of design and thinking that went into this research,’ says Audrey Moores, who studies nanoparticle catalysts at McGill University in Canada. ‘In a way it is a very small modification of the classic solution-to-solution injection everyone is using, yet it led to a dramatically different result.’ Moores adds that she will use the ice melting method in her own lab.

Ultra-slow reagent release by ice melting could prove useful beyond metal atom synthesis. ‘In the future, we want to look at not only aqueous solutions but also other solvents to potentially carry out organic chemistry reactions,’ Wu tells Chemistry World. Moores thinks that ‘these solutions would be very helpful to immobilise single atoms on supports, thus greatly reducing the energy effort compared to chemical vapour deposition methods’.