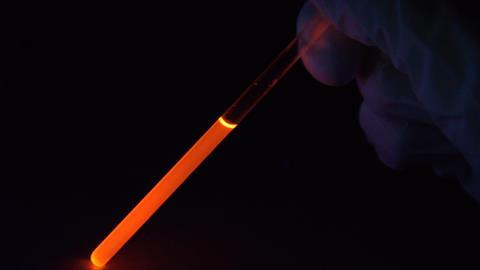 The side-on connection of a boron–boron triple bond to a metal has expanded the repertoire of metal-bound triple bonds beyond purely organic alkyne ligands. This has enabled chemists to form π complexes with copper(I) atoms, one of which has an intense phosphorescence in the red to near-infrared region of the electromagnetic spectrum.

Carbon–carbon triple bonds are well known and π complexes formed between alkyne groups and coinage metals are exploited regularly in organic synthesis and catalysis. Far rarer are non-carbon analogues of the alkynes bound through π bonds to copper and its chemical cousins. Platinum and palladium complexes of disilynes, heavier alkyne analogues, are known, but the trans-bent nature of triple bonds between the heavier elements produces unusual bonds with the metals. However, an international collaboration has now exploited boron’s propensity to form bonds in a manner not dissimilar to that of carbon.

The research teams of Holger Braunschweig and Andreas Steffen of the Julius Maximilian University of Würzburg in Germany, along with colleagues at the University of Sussex, UK and Tezpur University, India, have used one of their diboryne molecules, featuring boron–boron triple bonds, to form a π complex with copper(I) atoms. They produced three different compounds with a varying number of copper atoms hooked to the boron–boron centre. More metal atoms means greater separation of the boron atoms and the boron from the attendant organic groups. The team’s density functional theory calculations reveal that there is greater orbital interaction than in related diborene π complexes, which contain just a double bond between boron atoms. 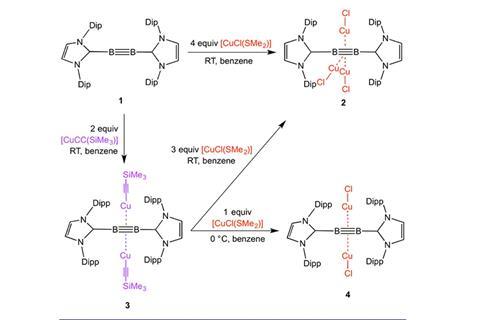 Perhaps of greatest potential technological interest is the fact that one of these complexes produces an intense phosphorescence in the red to near-infrared region. This is generated by emission from the triplet excited states of the complex.

Previously, the team demonstrated that copper and silver fragments could complex with a base-stabilised diborene, but computational studies on diboryne units suggested that the triply-bound diborynes would form stronger π bonds with a large fraction of covalent character. After much trial and error the team were able to isolate complexes of the diboryne with either two or three neutral copper fragments. Despite the higher metallation of the boron–boron bond unit, the copper atoms were each able to form significant covalent π bonds with the ligand. This proves that the diboryne can form real orbital overlap with a metal, unlike doubly-bound diborenes, which only bind through electrostatic interactions. The consequences of this are clearly reflected in the intense phosphorescence of the compound.

‘This work on π-bonded compounds between Cu–X and a boron–boron triple bond is very exciting,’ Suning Wang of Queen’s University in Canada tells Chemistry World. Wang is a world leader in emissive boron-containing materials. ‘It establishes and confirms for the first time that the boron–boron triple bond can react in a similar manner with transition metal ions as do alkynes.’ She adds that the surprising attachment of three copper chloride units to a single boron–boron triple bond with no peripheral support implies that the diboryne molecule has a very high affinity towards transition metal ions. ‘This should lead to new and interesting chemistry,’ she says. Wang suggests that the rare and highly efficient phosphorescence is ‘highly intriguing’ and ‘certainly reflects the unique electronic nature of diboryne and unveils new opportunities in designing and developing phosphorescent materials based on inexpensive metal ions such as copper and demonstrates the great potential of diboryne based chemistry and applications’.