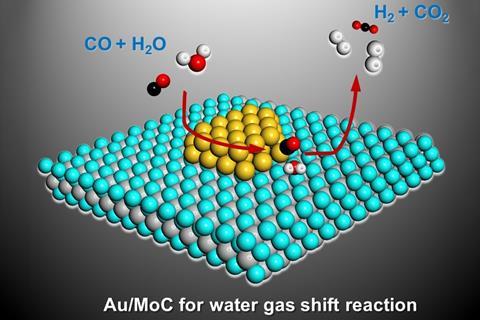 The water–gas shift (WGS) reaction combines carbon monoxide and water to make hydrogen and carbon dioxide. It is used industrially to produce hydrogen, which can then be made into base chemicals like ammonia. While industrial catalysts for the WGS are well established, those for another emerging application, fuel cells, are not.

Hydrogen fuel cells need to run on a fairly pure stream of the gas as they are susceptible to carbon monoxide poisoning. The WGS is ideally placed to perform this task, but at the same time it is an exothermic equilibrium reaction: at lower temperatures it favours carbon monoxide conversion, but it also becomes slower. Industrial WGS catalysts operate most efficiently at temperatures above 200°C – any lower and the process becomes sluggish and needs a lot of expensive catalyst to keep it going.

‘Researchers have been searching for a low temperature WGS catalyst for years,’ observes Ding Ma from Peking University, China. A team around Ma and his colleagues José Rodriguez from Brookhaven National Laboratory, US, and Chuan Shi from Dalian University of Technology, China, has developed a catalyst that can run the WGS at temperatures as low as 40°C – though it is most active at 150°C. The material comprises 2% nanosized gold clusters on α-molybdenum carbide particles. The key to its activity, explains Rodriguez, is that ‘gold can activate carbon monoxide, and α-molybdenum carbide is very active for water dissociation at low temperature’.

Fabio Ribeiro, who studies heterogeneous catalysis mechanisms at Purdue University, US, points out that the team’s noteworthy achievement is synthesising gold nanoparticles only about 1nm in diameter. Gold has a tendency to sinter, small particles coalescing into larger ones over time. Shi, Rodriguez and Ma think the molybdenum carbide’s structure and its interaction with gold might stabilise the noble metal. ‘The small size implies that the nanoparticles will have all gold atoms active and as a consequence the catalyst will be very efficient,’ Ribeiro says.

Shi, Rodriguez and Ma are now working on replacing gold with a cheaper metal for industrial applications.