Immense oganesson projected to have no electron shells 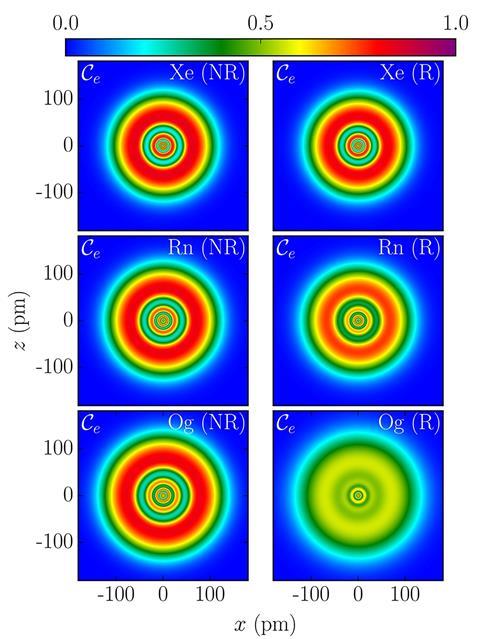 Electron localisation modelled using non-relativistic (left) and relativistic (right) calculations for xenon, radon and oganesson. The work suggests that electrons are no longer confined to distinct orbitals in oganesson and are distributed evenly

Oganesson, also known as element 118, was named for its formal place in the periodic table: the ‘-on’ suffix recognises that it sits at the bottom of the noble gases. But the periodicity of chemical properties has been found to be disrupted for some other superheavy elements. So is oganesson really like the other members of its family?

It is too short-lived and made in quantities too small to probe that question experimentally. But a team in New Zealand and the US has now carried out state-of-the-art calculations of the element’s electronic structure, and they predict that oganesson may be a very unusual kind of atom indeed.1

On paper, oganesson has the closed-subshell rare-gas electronic configuration, ending with a filled 7p shell. But theoretical chemist Peter Schwerdtfeger of Massey University in New Zealand, nuclear physicist Witold Nazarewicz of Michigan State University in the US, and their co-workers predict that perturbations of electrons orbiting such an immense nucleus cause them to more or less lose their shell structure entirely and to become smeared out into a diffuse ‘gas’ of charge.

Some of the radioactive superheavy elements made artificially by bombarding heavy targets with accelerated ions stick around long enough for chemical experiments, in which the elements are chromatographically separated and their valence states examined one atom at a time. Such experiments have shown, for example, that elements 104 and 105 – rutherfordium and dubnium – deviate somewhat from the behaviour expected from their position on the periodic table, whereas element 106 (seaborgium) does not.2 These irregularities stem from changes to the electron energies caused by their near light speed velocities around such massive nuclei. The heaviest element so far studied chemically is flerovium, element 114, some isotopes of which have a relatively long half-life of 1–2 seconds.3

Oganesson is named after Russian scientist Yuri Oganessian who for many years led the work on superheavy elements at the Joint Institute for Nuclear Research in Dubna. Element 118 was first made at Dubna in 2002, but recognition and priority for the discovery was only confirmed by the International Union of Pure and Applied Chemistry in 2015. The name was officially recognised last November.

With a half-life of less than a millisecond, the most accessible isotope of oganesson (oganesson-294) can’t be subjected to chemical examination. ‘The production rate of an element like oganesson is very low and will not enable chemical tests of its properties in the foreseeable future,’ says nuclear physicist Paul-Henri Heenen of the Free University of Brussels in Belgium. So calculations are the only way to get at its behaviour.

Computing its electronic structure is a formidable task using present quantum-chemical methods, and Pekka Pyykkö of the University of Helsinki says that the calculations by Schwerdtfeger and colleagues ‘are the best currently available’.

The researchers say that relativistic effects are very significant for oganesson. They show up particularly in the ‘spin-orbit’ coupling – the interaction between the electrons’ spin and their orbital motion. The large coupling leaves the shell structure – visible as a nested concentric pattern in a measure called the electron localisation function (ELF) – smeared to near-invisibility. The electrons are then distributed almost as if in a uniform gas, called a Fermi gas.

This effect is gradual as atoms get heavier, says Schwerdtfeger. ‘But oganesson is quite different to the other rare gas atoms, as its shells are barely visible in an ELF plot,’ he adds. ‘Oganesson comes quite close to the limiting case of a Fermi gas.’

The Fermi-gas-like electrons are sloshy and easily polarised, which means that oganesson atoms should experience strong van der Waals forces. ‘According to our prediction, oganesson is not a gas but a solid at room temperature,’ says Schwerdtfeger. ‘It will also more easily undergo chemical bonding [compared to other rare gases], as the p electrons can more easily be removed due to a very large spin-orbit destabilisation.’

These results show ‘that indeed the properties of superheavy atoms and nuclei should be different from what one can expect from a simple continuation of lighter elements’, says Heenen. But he adds that ‘experimental confirmation of theoretical predictions cannot be envisaged before the production rate of oganesson has been increased by orders of magnitude’.