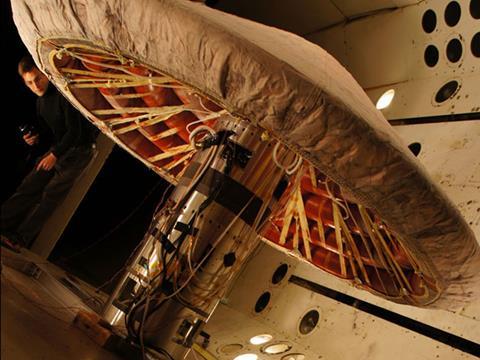 The giant inverted mushroom plummeting from the sky off the coast of Virginia in the US was not a figment of an onlooker’s imagination. This was the most recent test by Nasa of a new concept for protecting and decelerating space vehicles as they descend onto a planet’s surface or return to Earth. The ‘mushroom’ in question is a large inflatable shell that is at the cutting edge of materials technology.

As a space vehicle enters the atmosphere of a planet it needs to slow down to reduce the impact upon landing and to reduce the temperatures on the surface of the craft. The latest idea is for the vehicle to carry an inflatable heat-proof shield – which Nasa calls Hypersonic Inflatable Aerodynamic Decelerator (HIAD).

‘The more you can decelerate a vehicle, the more weight you can carry to the ground,’ says Walter Bruce, who heads the thermal programme on HIAD. The inflatable heat shield, which has just been tested in a demonstration flight off Wallops Island in Virginian, consists of multiple concentric ‘inner tubes’, which are inflated by nitrogen to form a wide, shallow cone. The system must be able to withstand temperatures of up to 1200°C, but also flexible enough to be folded up.

‘The big challenge is to be able to pack the shield into a relatively small volume, so you can’t use a conventional rigid thermal protection system,’ says Bruce. To achieve this, a multi-layered system of high tech fabrics is used.

The outer covering is made from two layers of a fabric called Nextel, an alumina–boron trioxide–silica fibre containing crystals of the silicate mineral mullite. This provides a robust, abrasion-resistant coat. Next there are two layers of a heat-insulating blanket made from Pyrogel. This is based on a silica aerogel that is reinforced with glass fibre. Pyrogel can withstand temperatures of up to 1200°C. The final layer consists of a laminate of Kapton – a polyimide membrane with high temperature stability – and Kevlar, made from para-aramid fibres. This layer provides extra strength and acts as a gas barrier. The inflatable torroidal bladders that are protected by these elaborate layers are made from silicone overlain by braided Kevlar.

The prototype, proof-of-principle system packs down into a rocket’s nose cone that is only around 55cm in diameter, but inflates to produce a heat shield that is almost 10m across. In a test run earlier this week off the coast of Wallops Island, Virginia, the system was released by a rocket almost 500km above the Earth. It reached speeds of more than 12000km per hour and temperatures of 800°C.

‘We are still analysing the data, but the indications are that it did exactly what we hoped it would do,’ says Bruce.