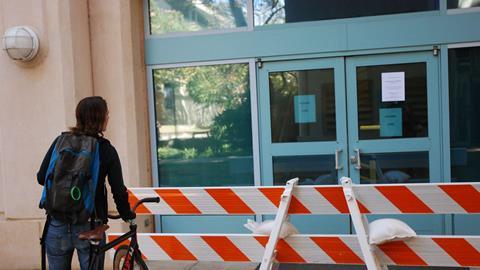 The postdoc who lost an arm last year in a lab accident at the University of Hawaii at Mānoa is suing the university, her supervisor and others. In the lawsuit she argues that she was provided with material and equipment that was inappropriate and unsafe for the research she’d been directed to carry out.

Thea Ekins-Coward, a UK citizen who was visiting the university as a postdoc fellow, was severely injured in March 2016 when an explosion occurred while she was mixing hydrogen, carbon dioxide and oxygen from separate cylinders to make a bacterial growth medium. In September, the Hawaii Occupational Safety and Health (Hiosh) agency found that the university failed to provide a safe workplace for employees, citing fifteen separate safety failures that contributed to the accident. Ultimately, Hiosh agreed that the university would pay fines of $69,300 – 60% less than the original fines levied by the agency.

Ekins-Coward, who was 29 at the time, had her right arm severed above the elbow and suffered corneal abrasions, as well as burns on her face and a loss of high frequency hearing. In her lawsuit, filed earlier this month, she says the equipment was not designed for flammable gases or grounded to prevent static discharges. It was a static discharge that likely caused the explosion that injured Ekins-Coward, according to analysis by the Honolulu Fire Department.

Beyond these equipment concerns, Ekins-Coward’s lawsuit also alleges that she had requested safety training on compressed gases and on the specific hazards of these gases, but her supervisor, Jian Yu, did not provide it.

Ekins-Coward’s lawyers maintain that the defendants were negligent, careless and reckless in having the postdoc undertake experiments that were ‘inherently and unnecessarily unsafe’, and failing to inspect the research equipment that she has been given. They are not seeking specific monetary compensation for damages at this point, but say the appropriate award should be decided at trial.

California trial lawyer Michael Danko, a lead attorney in the case, says that private parties cannot bring criminal charges, so the only thing that Ekins-Coward can get from the lawsuit is money. ‘Thea trusted the university, the university knew that the design of their experiment was extremely dangerous, and did nothing to warn Thea, even after she expressed her concerns,’ Danko states. After the university’s experiment cost Thea her arm, he says the university turned its back on her and cancelled her visa.

‘The university has had its hand slapped by Hawaii’s [safety body], and it’s back to business as usual,’ Danko states. ‘We want to shine a bright light on the university’s conduct and hold it accountable so that this doesn’t happen to someone else.’

The university says it has not been served, and notes that it cannot comment on pending litigation.