Scientists in Denmark have, for the first time, detected a hydrogen bond between an N–H and phosphorus in the gas phase. 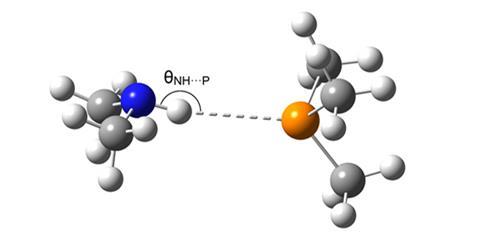 The researchers have detected and Nâ€“H...P bond in gaseous dimethylamineâ€“trimethylphosphine complex

Hydrogen bonding has been extensively studied in recent years as scientists have attempted to visualise it, with debatable success. But there are still a variety of hydrogen bond acceptors that have yet to be detected, as spectroscopic techniques are not sensitive enough to analyse faint traces of these elusive molecular linkages. Many common bond donors, such as F–H, O–H and N–H, have been identified, but phosphorus as an acceptor has been difficult to pin down as it is widely regarded as a very weak hydrogen bond partner.

The team at the University of Copenhagen has now successfully identified this acceptor in an N–H…P form within a gaseous dimethylamine–trimethylphosphine complex. Using Fourier transform infrared spectroscopy, they searched for any redshifts brought about by the periodic stretching of N–H bonds – a typical sign of any external influence from a bond acceptor. Henrik Kjærgaard and colleagues established that, in this environment, phosphorus has a similar acceptor bond strength to sulfur and is markedly stronger than an oxygen acceptor.